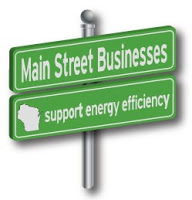 From an article by Charles Davis in the Green Bay Press Gazette:

Thousands of future jobs are at stake if Gov. Scott Walker doesn’t veto a provision in the state budget that limits funding for the Focus on Energy program, local business leaders said Wednesday.

“I see it being a real detriment to our business and our customers going forward if we don’t have these funding increases,” said Jeff Klonowski, regional manager of Kaukauna-based Energy Federation Inc., which supplies lighting fixtures, foam and weather-stripping materials to area contractors.

But supporters of the provision object to the amount of the funding increase, not the program.

“The Focus on Energy program certainly had a lot of benefits, but the huge increase in assessments that were put in place at the end of last year, we think, were too much, too soon,” said Scott Manley, director of environmental and energy policy for Wisconsin Manufacturers and Commerce, the state’s largest business lobby.

Walker received a letter Wednesday signed by more than 120 businesses asking that he veto that provision in the state budget bill. His office responded with a one-line statement: “We’ll evaluate that provision and make any veto-related announcements once the decisions have been finalized.”

The program
The statewide Focus on Energy program is funded by tax assessments on utility bills and provides grants to help homeowners and businesses pay for energy-efficient upgrades. It also helps pay for consultants to advise property owners on which type of upgrades would be practical and cost-effective. Each year, utility companies contribute 1.2 percent of revenue — about $100 million total — to the program.

The state Public Service Commission proposed in December raising the utility bill assessments from $94 million in 2010 to $256 million by 2014.

The proposal calls for utilities to increase their contributions to $120 million this year. That amount is fixed even if Walker does not veto the provision. However, assessments would drop to around $100 million in 2012, instead of the initial proposed increase of $160 million for that year.