A Scientific Look into Wind Power and Human Health 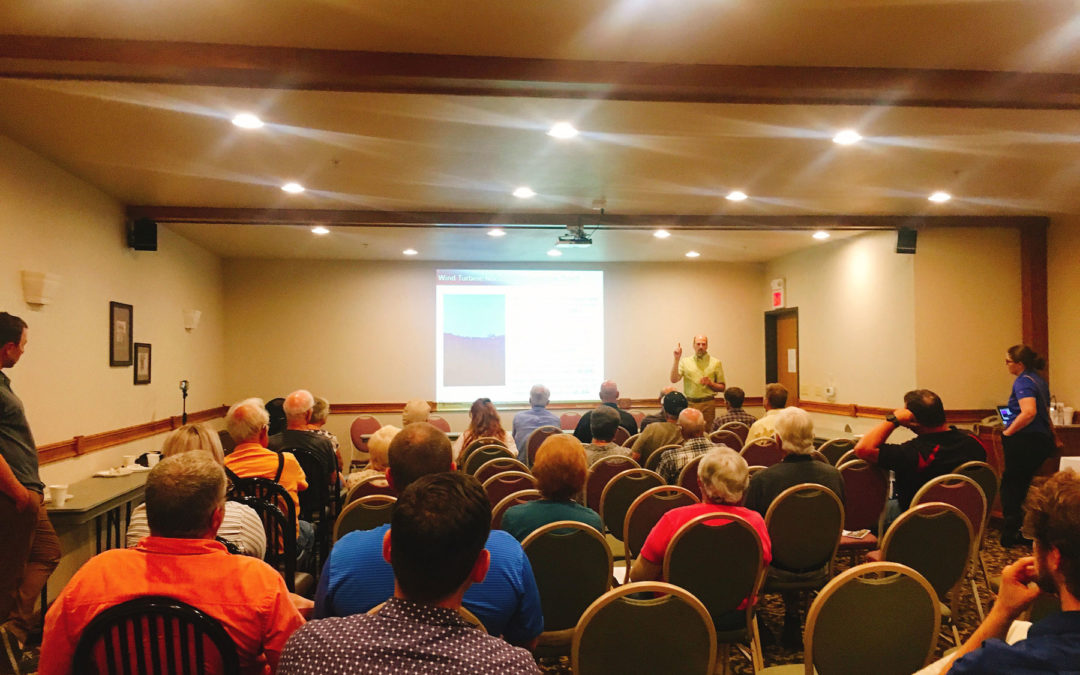 MONROE, Wis. – The subjects of wind power, noise, and health impacts converged and took center stage at an August 6 educational forum held at the local Super 8 Motel, a few miles northwest of the proposed location for the hotly debated Sugar River Wind Farm. RENEW Wisconsin and Clean Wisconsin teamed up to organize the forum, which drew about 25 people from around the area.

Proposed by EDF Renewables, one of the largest wind development companies active in North America, the Sugar River Wind Farm would consist of 24 utility-scale wind turbines located in the Town of Jefferson, which borders Illinois. The proposal, now under review by the Green County Zoning Administrator, must comply with the siting standards established by rule in Chapter 128 of the Public Service Commission’s code.

The education forum came at the heels of a public hearing on the proposed wind farm held at the Green County Courthouse in Monroe. At the July 30th hearing, about 30 Green County residents expressed their views on the Sugar River project. Many of those who spoke expressed concern about sound from the turbines, which some believe have adverse health impacts.

The August 6 event led off with a presentation by Michael Hankard, a Verona-based expert on environmental noise who has assessed many wind power projects around the country. Hankard’s presentation began with an overview on acoustics before zeroing in on the noise standards that wind turbines must comply with and what he has learned through his measurements and analysis.

Hankard noted that the maximum sound limit specified in PSC 128 (45 dBa) is in line with what health authorities recommend, including Health Canada and the World Health Organization. Among the Upper Midwest states that have established noise standards for wind turbines, only South Dakota’s standard is as stringent as the limit prescribed in Wisconsin, Hankard said.

Referring to Health Canada’s 2014 study, Hankard said: “The government of Canada performed the most extensive study done on wind turbine health impacts and noise impacts that’s ever been done. Their conclusion was that under 46 dBA, there are no demonstrated health effects. Yes, there is annoyance, some people are annoyed with noise at that level, but it’s not a health concern.”

Responding to a question on whether larger wind turbines produce more noise than smaller turbines, Hankard said: “The answer is no, but that is because they turn slower. They put out less noise across the entire frequency spectrum. The measurements bear it out.”

On the subject of low frequency noise and infrasound, Hankard said that wind turbines do not produce significant amounts of either type of sound, adding that medical science does not support any linkage between turbine-generated sound at low and ultralow frequencies and adverse health effects.

In the panel session that followed, the focus shifted from the acoustical properties of wind turbines to a broader discussion that encompassed energy choices, climate change, and human health.  The lineup of speakers included:

Laeser is also an agriculture and water quality specialist for Clean Wisconsin. Both Lewandowski and Downs are steering committee members of the Wisconsin Environmental Health Network, while Jeff Rich recently joined RENEW Wisconsin’s Board of Directors.

All the panelists agreed that deriving energy from carbon-based fuels creates a host of health and environmental impacts that go beyond the range of annoyance that a few people experience related to wind turbines.

“Things like asthma, cardiovascular disease, that’s easy for people to understand, but there are a lot of other effects from burning fossil fuels,” Lewandowski said.

While Lewandowski acknowledged that audible noise from wind turbines can be a concern for some, the choice between continuing to burn fossil fuels vs. living near a zero-carbon energy source is clear-cut.

“I would much rather have something that produces the same decibel level as a refrigerator than the effects [of burning fossil fuels] documented here,” he said while holding up an issue of The Lancet, a medical research journal.

On the subject of self-reported claims of health impacts, Downs said: “There’s a small percentage of people who experience that stress,” noting that this phenomenon is dependent on the person’s financial relationship to the wind project and their attitudes towards clean energy.

“It’s a sticky wicket to talk about stress and health effects, because we don’t know the strengths of the relationships in play,” he said.

Rich encouraged audience members to visit other wind power projects and talk to the people who live near them. “I’d be the first to help connect people if they want to go to Cashton to see the turbines right on the edge of town next to Organic Valley’s distribution center. People are there every day.”

In addition to thanking our featured speakers, RENEW and Clean Wisconsin wish to acknowledge both Gof Thompson, a long-time Clean Wisconsin board member and Green County resident who cheerfully kicked off the program with a few observations and anecdotes, and Art Bartsch, who graciously agreed to host the program in the energy-efficient, solar-powered motel he owns in Monroe.

Video of the entire Wind Energy and Health event can be viewed HERE.