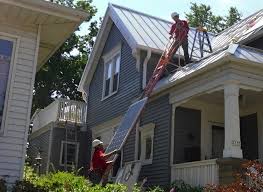 Today, Dane County Circuit Court Judge Peter Anderson overturned a key ruling that would have led to We Energies electric customers who generate some of their own power having to pay extra fees back to the utility.  RENEW Wisconsin and The Alliance for Solar Choice joined together to challenge the Public Service Commission (PSC) ruling on this fee.

“The judge today determined that there was not sufficient evidence to support the decision made by the Public Service Commission, and ruled that he is vacating these fees,” said Tyler Huebner, RENEW Wisconsin Executive Director.

In Fall of 2014, We Energies proposed that a customer who creates some of their own power to reduce their usage of electricity would be forced to pay an additional fee of $3.79 per kilowatt of power capacity per month.  For a typical 5 kilowatt solar installation on a home, that would have amounted to about $19 a month, or $227 per year, and a 27% reduction in energy bill savings.  Customers using biogas or hydropower would have faced a higher fee, $8.60 per kilowatt of power capacity.

The Public Service Commission, Wisconsin’s state agency that regulates utilities like We Energies, approved the proposal in December 2014.  They became just the second regulatory agency in the country to do so, after Arizona, where a small $5 per month fee was approved on solar customers.

The fees were set to begin in January 2016, but will not go into effect.

The Judge asked the parties (TASC, RENEW, We Energies, and the PSC) to draft an order consistent with his verbal statement.

The Judge’s decision is the third time in two years that PSC decisions governing customer-owned renewable generation have been overruled by the Dane County Circuit Court.

“Renewable energy is good for Wisconsin. When customers produce their own power, it increases our energy independence. When customers produce their own power, it increases energy security. A growing renewable energy industry will create jobs and bring investment to the state. Renewable energy is growing in states all over the country, and states right next door to us like Iowa, Michigan, and Minnesota, and hopefully this decision will enable more of We Energies customers to take advantage of all the benefits of clean energy,” concluded RENEW’s Huebner.