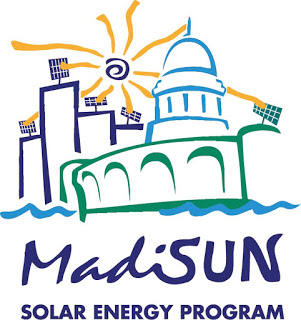 Nearly 350 households in the Madison area have signed up to take the first step toward solar power for their homes, exceeding enrollment expectations for the MadiSUN Solar Group Buy Program. The City of Madison announced the Group Buy Program, along with a new Solar Energy Loan, in June of this year.

Twelve households have already signed contracts to install rooftop solar systems, putting the program well ahead of its goal to contract 15 solar systems by November 1, 2016. The solar systems contracted so far represent 55kw of solar electric capacity and over $150,000 in local renewable energy sales.

As MadiSUN approaches the end of its recruitment period on Monday September 19th, program managers remain optimistic that more households will choose to go solar.

“We are really pleased with the level of interest we’ve seen,” said Katherine Klausing, Engagement Manager at RENEW Wisconsin, the nonprofit program administrator. “Madison families recognize that putting solar panels on their homes can lower their energy costs and increase their property values. But it’s also an investment they can be proud to make. This is a step in the right direction.”

The success of the MadiSUN Group Buy comes at a time when cities across Wisconsin are looking at expanding access to solar. Solar group buy programs in Milwaukee, Racine and Eau Claire have also taken off this year. Nationwide, 73 percent of Americans say they want the US to prioritize renewable energy sources like solar and wind over fossil fuels like oil and gas.[1]

Many households are investing in solar to help their personal finances—a typical 4kw system can save a household over $1,700 in energy costs for each year of its 30-year life. But local solar energy businesses are also seeing a boost to their bottom lines.

“The MadiSUN Group Buy has been great in helping in us grow our business,” said Burke O’Neal of Full Spectrum Solar, a Madison-based solar installer selected to serve the group. As a result of the surge in new business, Full Spectrum Solar has hired an additional full-time staff member in its office and several part-time installers for its field crews.

Madison resident Brian Lavendel is installing solar panels for himself and his neighbors, who rent the other part of Lavendel’s 2-unit home. “It was easy—it was like one-stop shopping. I attended an information session, which was particularly helpful because it brought together all of the pieces—the Group Buy, the federal tax credit, and the Focus on Energy program—so I got all of my questions answered. The fact that it was a Group Buy, with terms all set up, helped too. I didn’t have a lot of time to research the different companies and panels. I knew that RENEW Wisconsin had already negotiated on my behalf, so to speak,” Lavendel said. “This is something I’ve thought about for a long time. The low price of the panels and the increased efficiency in their energy production made it feasible. I probably could have done it earlier, but the MadiSUN program made it easy.”

Program Background: The MadiSUN Group Buy for Rooftop Solar program enables Madison residents to “go solar” together.  The program selected Madison-based business Full Spectrum Solar to serve the group. The City’s investment in marketing and competitive bidding drove down the cost for each participant, resulting in savings of about 14 percent.

The cost of installing solar has never been lower, as homeowners can receive a Federal Tax Credit for 30 percent of the system cost, while Wisconsin’s Focus on Energy program offers up to $2400 in rebates for installing solar.