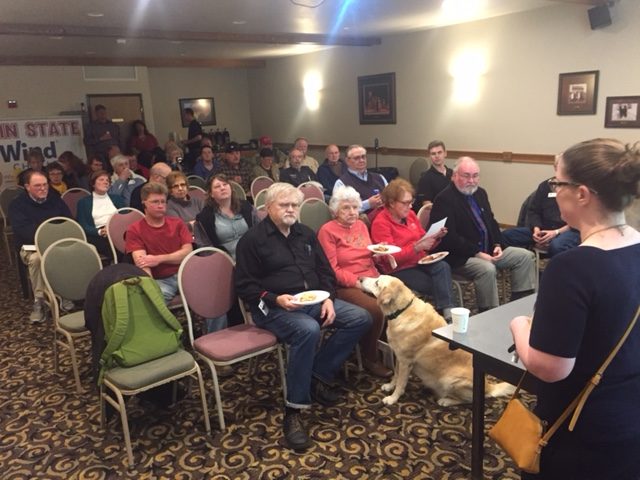 The Wind Education Event was hosted by Art Bartsch, local entrepreneur, green businesses innovator, and proprietor of the Monroe Super 8 Motel. Tyler Huebner, Executive Director of RENEW Wisconsin, kicked off the event with an overview of wind energy in Wisconsin. Then a panel of local experts including Mayor Dave Breunig (City of Darlington), Alder Steve Pickett (Darlington), and Tim McComish (Chair of Seymour Township Board), discussed their experiences with the Quilt Block Wind Farm located in neighboring Lafayette County. The event concluded with a demonstration of the power of wind energy from Dick Anderson and the student scientists of Kid Wind. Brodie Dockendorf (EDP Renewables) was also in attendance and addressed many technical questions about how wind turbines work. You can watch the video of the entire event on our Facebook page at this link.

Energized in 2017 and located wholly within Seymour Township in Lafayette County, Quilt Block serves as an excellent case study for future wind farms in the area. Quilt Block is a wind farm comprised of 49 modern turbines able to generate up to 2 MW each. Forthcoming wind farm projects planned in Wisconsin are likely to use similar scale or slightly larger turbines. The Sugar River Wind Farm proposed for southern Green County would host turbines with capacities of 2.625 MW and 2.75 MW.

The Quilt Block Wind Farm offers many economic benefits to Lafayette County. According to Mayor Dave Bruenig and Alderman Steve Pickett, the project construction supported local businesses through a variety of activities including the construction of a $700,000 warehouse and office space, the presence of the construction crews, and the full-time employees who purchased homes in the community. Mayor Dave Bruenig said that hotels, restaurants, automotive dealers in Darlington, and the neighboring communities saw benefits and that Green County could expect to see a “big economic boom” with the planned Sugar River wind farm.

The speakers emphasized the value of Wisconsin producing its own energy. Wisconsin imports $14 billion dollars worth of oil, coal, and gas, money that could be reinvested locally if we produced our own energy. Alder Steve Pickett said, “I think the energy that they’re going to be providing will help us be self-sustaining. And in the future that’s going to be very, very important, because if there’s any growth you’re going to need to have to have electricity to do it. And the only way you can do it is to start to generate your own.”  When speaking about his grown kids returning home he noted that, “we have a great life here and I’d like to keep it that way and part of that is being able to develop power within our own communities.”

The presenters also addressed questions about what it’s like living near the turbines. Tim McComish who runs a family farm with 250 Holsteins said “I live in the center of Seymour Township, they’re [the turbines] are all around me.” He added that they have started to become part of the landscape. “As crazy as it sounds, the 49 around me, I have to look once in a while to see where they’re at, because they blend in.  It’s amazing.” He added that the sound of the turbines, even the one on his property doesn’t cause any concern. “I myself, don’t even hear them at night. It’s part of the farm,” he added.

Below are some highlights of the event’s discussion. Questions are paraphrased for clarity.

Question: Does the electricity that’s made by your wind turbines stay in the county?

Brodie Dockendorf (EDP Renewables): We sell to Dairyland Power Cooperative out of La Crosse, Wisconsin. They actually sell electricity to Scenic Rivers, which is local, it’s sold locally to Seymour township. The dollar flow might go to La Crosse, Wisconsin, to Dairyland Power Cooperative, but the electricity, the electrons that are being generated, are actually used locally.

Question: Are people selling their houses because of the wind farm in your community? Have those homes sat on the market without buyers?

Mayor Breunig: No not at all. There’s a shortage of workers, there’s also a big shortage of housing. One of the things we got going up on one end of town is 24-unit housing. It didn’t affect us at all.

Tim McComish: There’s not a house available in our township for rent because there are workers looking for homes all the time.

Question: What about productivity of cows that live near wind turbines?

Tim McComish: I’m a dairy farmer, we’re still milking as good or better than before. It’s not affecting us.

Question: What about health issues and soil quality around wind turbines?

Tyler Huebner: Growing up in a town almost the exact same size as Monroe, eight thousand people, right now there are two hundred and sixty turbines recently built in my county, Poweshiek County. Twenty-four are being explored here in Green County versus two hundred and sixty. Everybody who’s going to lease those turbines to those developers or those utilities, they’re all corn farmers too. There’s at least ten times as many wind turbines in Iowa, and I have not heard anything come out of Iowa that would equate a loss in production or a change in the soil quality or anything like that related to wind.

In Iowa I have not heard any health complaints anywhere near where I grew up. I know that there is a lot on the internet that can be found, on this point there are some pretty reputable studies that have been done by Massachusetts Department of Environmental Health. I know that the Australian National Health Association have looked at these claims and basically found that, if you look at the scientific and the medical peer reviewed studies that there has not been found a link between human health impacts and living near wind turbines.

We also have references to a number of reputable studies on our website with more information about health and wind.

Question: Could someone explain to me how you take DC current and convert it to AC current?  Who monitors the IEEE standards?

The same methods are used throughout the United States. There are turbines that will take a variable frequency. They take an inverter, like you would have a DC inverter for solar batteries, your car, and what they do is they actually convert it to DC and then they convert it right back to AC using an inverter.

As far as the standards of electricity go, if we put dirty electricity on the grid, MISO, is always monitoring.  The transmission companies (ATC and ITC) are monitoring our output. If we are even out of spec of the 60Hz cycle, they will open our breakers and shut us off.”

Question: What about harmonic distortion?

Brodie Dockendorf: There are harmonic filters on everything. We have harmonic filters in our substations. We also have phase compensation, big capacitor banks, any other electrical generator. We are scrutinized. We are a federally regulated power generation company, just like any other generator. There are some manufacturers [of wind turbines] that do [DC generation]. We’re scrutinized just like everybody else. We have to maintain no disturbance on the grid. If you cause disturbance on the grid, that kicks in fines. NERC and FERC regulations keep us in line. We can’t just go and do whatever we want on the grid and cause problems. If we do, [there are] big fines. Even if I miss a substation inspection – they can fine us up to $1,000,000 a day. We are regulated beyond what we can even imagine. So we are on top of our game.

Thank you to everyone who participated in this informative event!  And if you would like to learn more about wind farms in Wisconsin please visit our Frequently Asked Questions page.