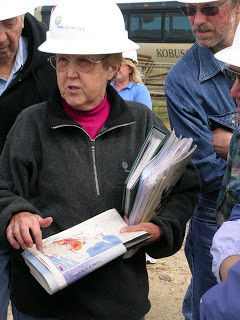 The Montfort Wind Energy Center, a popular attraction in western Iowa County along U.S. Highway 18, turned 10 years old this summer. The 30-megawatt (MW) project, which for many years was Wisconsin’s largest commercial wind energy installation, began generating electricity in 2001, and thus far has produced over 500,000 megawatt-hours of electricity. In a typical year, Montfort’s output serves more than 5,000 households.

The project’s 20 turbines are divided into two arrays. The main array, consisting of 17 turbines, runs along the southern side of U.S. 18 between Cobb and Montfort. The output from those 17 turbines is sold to Milwaukee-based We Energies. The other three turbines, located to the south of the main array, produce electricity under contract to Alliant Energy’s Wisconsin Power & Light subsidiary, whose service territory covers Iowa County.

Originally developed by Enron Wind, the Montfort project was purchased in 2001 by NextEra Energy Resources, a Juno Beach, Florida-based company. Residents of Cobb and Montfort have been strongly supportive of this project. “Montfort has a gas station called Windmill Mobil,” said Carol Anderson, a project landowner. “Most commonly, I hear people ask ‘When we’re going to get more’?” Just east of the Windmill Mobil, an informational kiosk on the project stands prominently in front of the Tower Junction restaurant, located directly across the highway from Montfort’s westernmost turbines.

Carol Anderson holds a map of Wisconsin to show a group the topography with the best wind resource for projects similar to the Montfort Wind Farm.

“People are also surprised at how quiet the turbines are,” Anderson said. “Some family members still live in our homestead only 2,000 feet from the turbines, and they don’t have any problems with noise or anything else.

This project has brought economic development to Iowa County,” Anderson said. “Conservation is a big value in this area. All of us appreciate the conservation aspects of the clean energy.” Montfort is not the first Wisconsin wind project to complete 10 years of continuous operation. Others include the Rosiere and Lincoln projects in Kewaunee County, totaling 31 turbines, and the two-turbine Byron project south of Fond du Lac along U.S. Highway 41.

“Wisconsin utilities are now in the process of spending more than a billion dollars to clean up their older coal-fired power stations,” Vickerman said. “This is a considerable expense that utility ratepayers will fully absorb. By contrast, Montfort’s owner will never have to spend a dime on pollution control technology over its entire operating life.”

“When you add the cost of retrofitting older coal-fired units to the cost of supplying these generators with fuel transported from Wyoming, windpower is hands down the better economic choice,” Vickerman said.