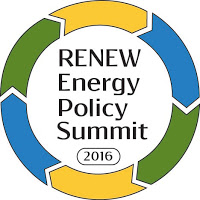 “Shaping the Utility of the Future,” our fifth Annual Renewable Energy Policy Summit, was another huge success for the organization.  Held January 21, 2016, it featured thought and action leaders from across the country and leaders from Wisconsin’s utilities and renewable energy industry

The event covered the gamut of opportunities and challenges for increasing renewable energy in Wisconsin. From both the number of attendees, and their feedback so far, we had the best Summit yet! 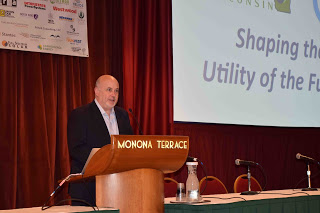 Mark Pocan gave our audience a warm welcome to Madison, and spoke about the job creation potential of renewable energy and his leadership in Washington, D.C.RENEW’s Tyler Huebner gave a review of 2015’s renewable energy policy impacts and a brief look forward to 2016’s top priorities.  Then, we handed the stage over to our opening keynote speaker.

Mary Powell, CEO of Green Mountain Power: “The Energy Company of the Future” 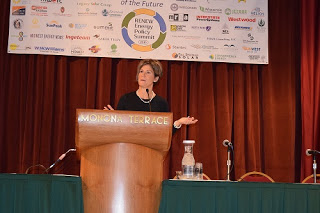 Mary started her speech with her own personal story. She grew up thinking she would become an artist, with no thought that she would ever become an executive.  She then transitioned into the evolution that she brought to Green Mountain Power, first starting with a cultural change.  She moved the executives out of an office building and into a converted maintenance building next to the line workers.

That lead to the transition in the electricity side of the business.  Mary’s business background outside of the utility industry taught her that the customer is king, and Green Mountain Power’s customer surveys showed customers wanted low cost energy, and more renewables.  Bucking the traditional thinking that low cost and renewables don’t go together, she challenged her team to figure out how to deliver what their customers want.

The GMP result is “stacking the benefits” as Mary calls it – finding ways to aggregate all the benefits of distributed generation in a way that can lower costs for everyone.  You can learn more about how Green Mountain Power is incorporating renewable and distributed energy, click here. 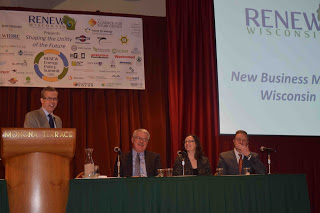 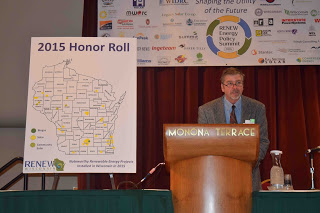 Over lunch, RENEW’s Michael Vickerman lead the recognition of over 40 of 2015’s best renewable energy projects.  Three categories were recognized:

James Tong, Spruce Finance, “The Democratization of Energy and the Networked Grid” 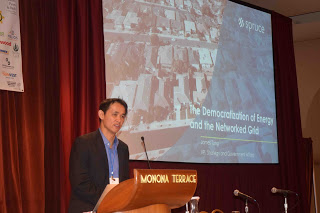 James Tong came into the renewable energy space trying to figure out how to increase solar installations.  He came to the conclusion that working with utilities, and sharing both the utilities natural advantages and the solar industries advantages together, will lead to the most solar at the lowest cost.

After realizing that many utilities will have a hard time making the evolution into solar, for both business and regulatory reasons, he has set out to establish a more democratized electricity grid that would enable market-based transactions for distributed resources.    That grid would behave much like the Apple “App Store,” with the utility owning and maintaining the grid as a platform, where valuable third-party providers could provide services. View James’ PowerPoint here. 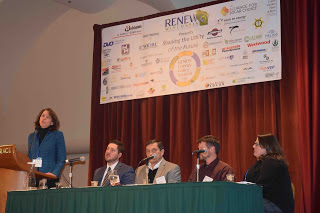 – Chris Kunkle, Wind on the Wires

These panelists discussed the market opportunity for their technology, the market barriers, and the policies in Wisconsin that would enable these technologies to grow.  The key policy for wind appears to be the Clean Power Plan, which Chris Kunkle said could lead to 2,000 MW or more of wind generation (Wisconsin currently has about 648 MW).   Solar has benefited from Focus on Energy and strong net metering policies, but these policies and programs need to be continued.  Also, Adam Gusse highlighted working together with utilities on interconnection as an area where time and cost can be saved.  Steve Dvorak of DVO highlighted the various countries and states his company is working in, and the need to re-focus on biogas development in Wisconsin as a win-win-win for renewable energy, our dairy farmers, and our lakes and air.

We hope you will join us next year for another great Renewable Energy Policy Summit!

Check out media coverage of the Summit below:

“Utility Officials Say Shift Away from Coal Will Be Gradual” WisBusiness.com