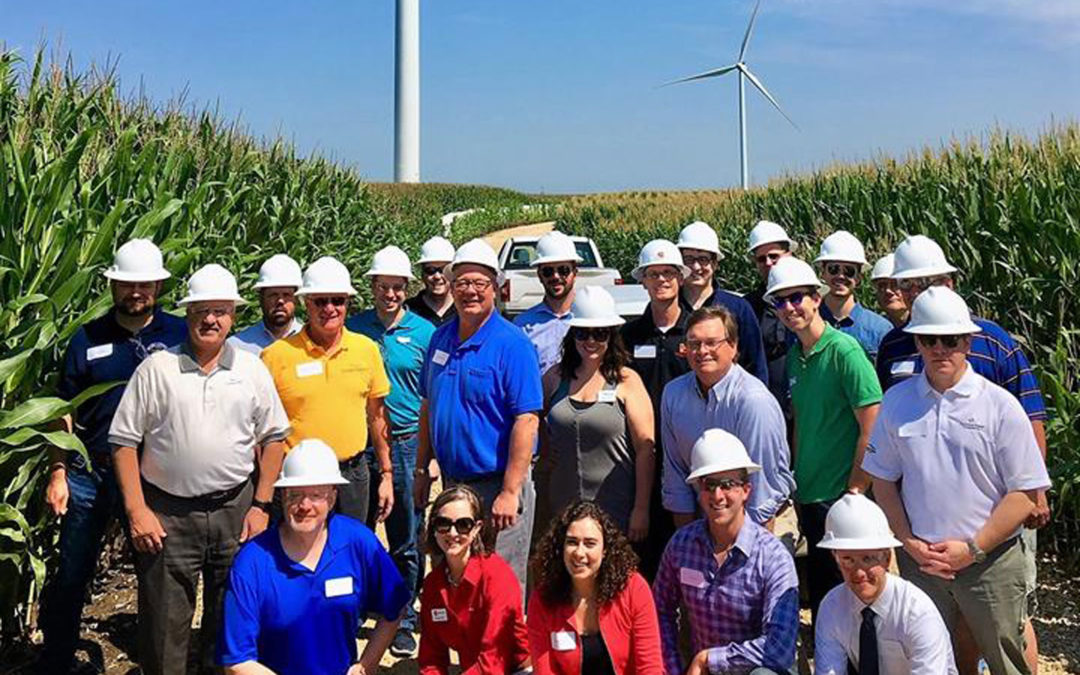 On August 9th, Vanessa Tutos, Director of Government Affairs for EDP Renewables hosted me and a large group of legislators, legislative staff and other interested people on a tour of their Quilt Block Wind Farm near Darlington, Wisconsin.

During a pre-tour briefing, Vanessa and the EDP Renewable staff gave an overview of the facility and how it works.  Darlington Mayor Dave Breunig also participated in the briefing, explaining the many benefits that the Quilt Block facility brings to the local communities, including not only the town and county tax revenues, but the good paying jobs at Quilt Block and the many community businesses that benefit such as restaurants, hotels and other shops.

On Tuesday, August 22nd, the Wisconsin Association of Energy Engineers invited me and Jane McCurry of the RENEW Wisconsin staff to tour something old and something new, all in one location, the School Sisters of St. Francis campus in Milwaukee. The Sisters recently installed a 375-kW solar array with 1,086 panels on several of their buildings.

Sister Carol Rigali, Coordinator of the province leadership team, specifically asked that the panels be made in the USA. As Mike Cornell of Arch Electric explained, they acquired the panels from Seraphim Solar USA, from Jackson, Mississippi.  Sister Carol said that St. Francis expects to save $1.5 million in energy costs over the life of the system, but that was only one reason they did the project.

She noted that in his 2015 encyclical Laudato Si, Pope Francis specifically mentioned installing solar panels as one way to care for creation.  “This solar energy project will enable us to lessen our energy consumption and to invest in our care of the earth.” The chapel was finished in 1914 but looks as amazing as the day it was built. The art and architecture inside compare to some of the best churches anywhere in the world. Now they have a state-of-the-art solar generation system that will help them achieve their mission now and into the future.  Preserving the past by embracing the future! Nicely done Sisters!

On Monday, August 27, I was joined by RENEW Wisconsin’s Executive Director Tyler Huebner, Scott Smith from Madison Gas & Electric and Neil Palmer from Invenergy to give a briefing to the Wisconsin Agriculture Coalition about the latest developments in renewable energy and how it may affect their members.  The Agriculture Coalition is a group of association executives and government affairs staff who meet regularly to discuss legislative and regulatory issues in which they have a common interest.

I opened the meeting by discussing the changing economics and politics of renewable energy and let them know that they are going to be seeing a lot of activity in Wisconsin. Tyler then gave an overview of renewables in Wisconsin that will especially impact farms and agriculture related businesses such as solar and wind farms and biogas generation.  Scott gave the utility perspective on why they are all adding large scale renewables to their portfolio and the benefits that they see for their customers. In particular, he noted that the driving force was the impressive price drop of over 75% for solar power in the last 10 years.

Finally, Neil spent some time explaining how Invenergy goes about developing a utility scale solar project, from identifying good locations with access to substations and landowners with enough flat, open land who are interested in leasing their property, to the steps and timing of the regulatory process. We also had a good discussion about the “frequently asked questions” that they may be hearing from their members and how to answer them. In summary, everyone in attendance received a good, general understanding of the amazing changes that are happening in the renewable industry and that RENEW Wisconsin is their source for reliable, fact-based information!

Members of the Ag Coalition include: