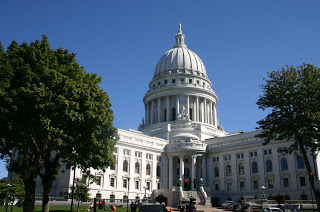 Governor Walker signed the State of Wisconsin’s 2015-2017 Budget into law on July 12, 2015.
There were five issues or potential issues that could have negatively affected renewable energy in Wisconsin.

At this juncture, RENEW feels like renewable energy got victories in 3 issues, a partial victory on a fourth, and a definite loss with the funding cut to intervenor compensation.

Let’s start with the victories:

Rumors swirled that changes to Focus on Energy, the state’s program for energy efficiency and renewables, could be introduced in the
budget, but they were not.  This is a significant victory in itself.
However, there may remain desire from some legislators to make changes
to Focus on Energy and we will be following that closely as the
Legislative session continues.

2. Victory: A provision that would have eliminated the need for the University of Wisconsin system to purchase renewable energy credits was introduced by the Governor as part of the creation of a separate UW Authority.  When the Authority idea went down, so did this provision. Great news!

3. Victory (mostly): The Governor’s budget included a provision to eliminate funding for the Wisconsin Bioenergy Initiative ($4,069,110 annually) and 35+ jobs.  This funding constitutes the state’s match for approximately $25 million annually from the federal Department of Energy.

Although the legislature agreed with the cut, the the UW plans to tap into other funding sources to maintain support for the Energy Institute.

4. Partial Victory:  Gov. Walker proposed up to $250,000 for the Public Service
Commission (PSC) to study “health issues related to wind energy systems”
and to prepare and submit a document reporting its findings to the
Governor and the Legislature.

The Joint Finance Committee stripped the funding for this study (that’s the partial victory portion), but still directed the PSC to conduct the study of health issues, even though the Wind Siting Council had just completed this in 2014.  With no funding allocated at this time, it is not clear how the PSC intends to carry out this directive.

5.  Definite loss:  An amendment to the budget slashing the amount of funding for citizen groups like RENEW and the Citizens Utility Board desiring to intervene in utility proceedings before the Public Service Commission.  Intervenor compensation is supported through utility revenues, not general purpose revenues. In addition to reducing the annual allocation from $1,042,000 to $371,000, the amendment also would have required intervenor groups groups to pay half the cost of their expert witnesses and legal counsel.

The Governor helped somewhat as he vetoed the Legislature’s attempt to place restrictions on funds used to intervene in PSC proceedings.
However, the Governor cannot use his veto pen to undo funding cuts
passed by the Legislature. For the next two years at least, intervenor
compensation awards will be capped at one-third the level they had been
in previous years.  Legislative action is needed to restore any funding.

RENEW issued a press release on July 9th criticizing the Legislature’s damaging cuts to the
intervenor compensation program. Our release states:  “By weakening citizen and small business representation before the PSC, Wisconsin’s legislature is effectively flashing a green light to utilities to come in with higher charges and new taxes to collect more money from customers and take away their ability to control their electricity usage.”