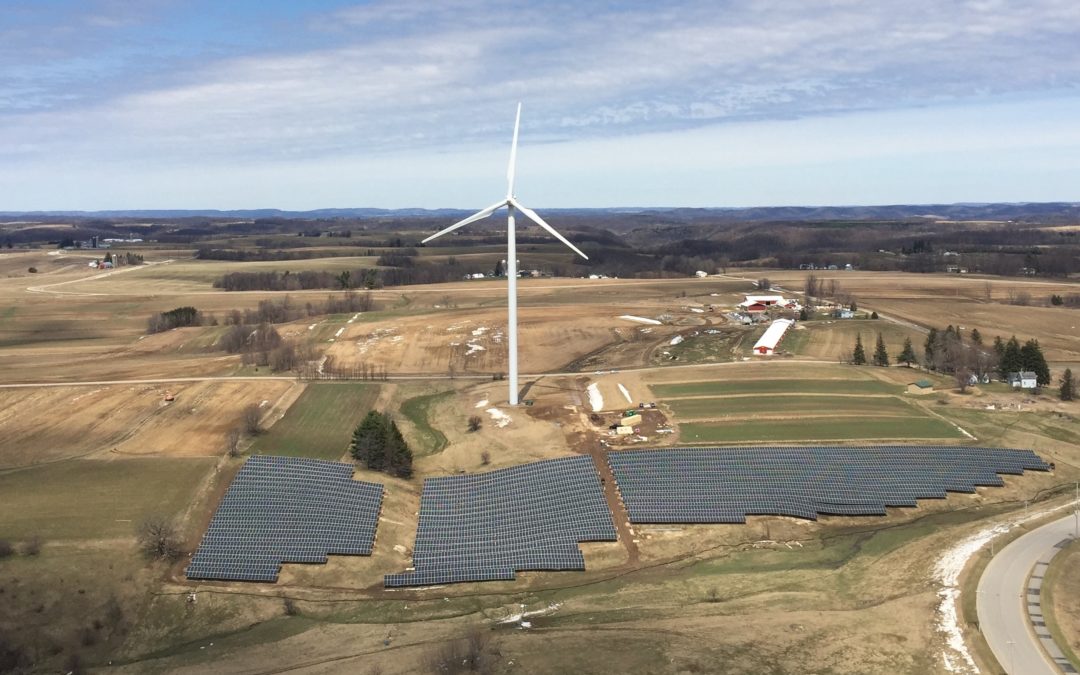 At its ninth annual Renewable Energy Summit, set for Thursday January 16, 2020, RENEW Wisconsin will recognize individuals and organizations who have made significant and lasting advances in renewable energy development here in Wisconsin.

Titled “2020 Vision: The Path to 100% Clean Energy,” RENEW Wisconsin’s Summit will take place at Monona Terrace in Madison.  Registration starts at 7:00 AM, with entry-level sessions on renewable energy and the electric grid at 7:30am.  The main program runs from 8:30 AM to 3:30 PM. The recognition ceremony will begin at 12:45 PM. (Link to Renewable Energy Summit)

At this year’s Summit, RENEW will present five awards to renewable energy champions, developers and businesses for their leadership and accomplishments in 2019. The awards have been grouped under four categories which are listed below. They are:

RENEWABLE ENERGY PIONEERS OF THE YEAR
This voluntary initiative, which will result in 1.5 MWAC of new solar power, involves many “firsts.” In 2017, Madison Gas and Electric (MGE) became the first electric utility in Wisconsin to launch a voluntary service that supplies electricity generated from a new solar power plant to retail customers. In 2019, MGE received approval for its first two contracts sleeved through its Renewable Energy Rider service.  Ground has now been broken on an array near Middleton’s airport that will supply solar power over a 30-year period to two pioneering MGE customers, Middleton-Cross Plains Area School District and the City of Middleton. When MGE’s array is energized later this year, these utility customers will become the first in Wisconsin to receive solar power under this novel structure.

RENEWABLE ENERGY BUSINESS OF THE YEAR
A family-owned business since 1977, Hayward-based Carlson Electric has emerged as a leading solar energy contractor serving much of northern Wisconsin. In recent years, Carlson Electric has demonstrated considerable skill in financing and designing solar systems for nonprofit groups and civic entities. Indeed, Carlson’s ability to access funds through the Solar for Good program, PACE financing, and Wisconsin Energy Innovation grants was a critical factor in helping such customers as Solon Springs School District, Spooner Ice Arena, Burnett County Humane Society, and Northland Lutheran High School invest in solar power in 2019. Carlson is well on its way to completing the state’s most expansive solar initiative aimed at low- and moderate-income households. By this time next year, Carlson will have financed and installed 269 kilowatts of rooftop solar capacity directly serving 108 apartment dwellers in Sawyer County.

RENEWABLE ENERGY CATALYSTS OF THE YEAR
(1) In 2014, the Sisters of St. Francis of the Holy Cross, located in Green Bay, commissioned the installation of a 112-kW ground-mounted solar array to power the premises and serve as an outdoor classroom on clean energy.  Working with the same local contractor (Eland Electric), the Sisters of St. Francis added a 98 kW array next to the existing one in 2019. The result is an inspiring and artfully arranged landscape that combines the ethic of planetary stewardship with the beauty of solar power. The leadership and guidance provided by Sister Rose Jochmann, chair of the community’s sustainability committee, was critical to the ultimate success of this initiative. In her own words: “In 2014, we had hoped to generate half of our electricity from solar but could afford only one-third. Our commitment to sustainability and care of the earth compelled us to look at our options again in 2018.”

(2) Located in Madison’s west side, Attic Angel Community is a senior living campus whose residents include many talented and dedicated volunteers. Last year, Attic Angels contracted with Pewaukee-based SunVest Solar to install PV panels on two apartment wings, totaling 98 kW. That first taste of solar power opened the door to a larger effort initiated by two volunteers living in the Attic Angels Prairie Point community, Bjorn Thompson and Jon McCarthy. Thompson and McCarthy have served on the community’s sustainability committee. Working with SunVest, they designed an offering—effectively a solar group buy—which they presented to their Prairie Point neighbors in hopes that they would take part. Of the 123 households living in Prairie Point, 40 signed up to host solar panels on their roofs, resulting in a total of 133 kW. With that initiative, combined with a 135 kW array installed in 2019 on the roof of Attic Angels’ memory care unit, the campus now hosts 366 kW of rooftop solar capacity, the largest serving a senior housing community in Wisconsin.

RENEWABLE ENERGY PROJECT OF THE YEAR
Butter Solar consists of 10 PV arrays in three states totaling 22.9 MWAC, including seven scattered across western Wisconsin with a total capacity of 17 MWAC. Taken together, the seven arrays constituted the largest addition to Wisconsin’ electric generating fleet in 2019.

From a contractual perspective, Butter Solar may be the most creative solar project in the country. Owned and operated by BluEarth Renewables, Butter Solar’s Wisconsin portfolio supplies low-cost power to the municipal utilities serving Arcadia, Argyle, Cashton, Cumberland, Elroy, Fennimore, and New Lisbon. The villages of La Farge, Viola, and Merrillan are also Butter Solar participants. The same project also generates Renewable Energy Credits for Organic Valley and the City of Madison, helping them meet their ambitious renewable energy goals.

Seattle-based developer OneEnergy Renewables, through their local Madison office, created the complex financing structure that allowed these entities to pool their resources into the project and receive value from it in return. OneEnergy also designed the arrays to blend in with the rural landscape while promoting wildlife and pollinator species. Wisconsin contractors such as Arch Electric contributed by providing expertise and high-quality workmanship.

This year’s summit program will also draw attention to other milestones and notable achievements in 2019, including the following:

Click here for more information on the 2020 Summit program agenda, speakers, and registration.