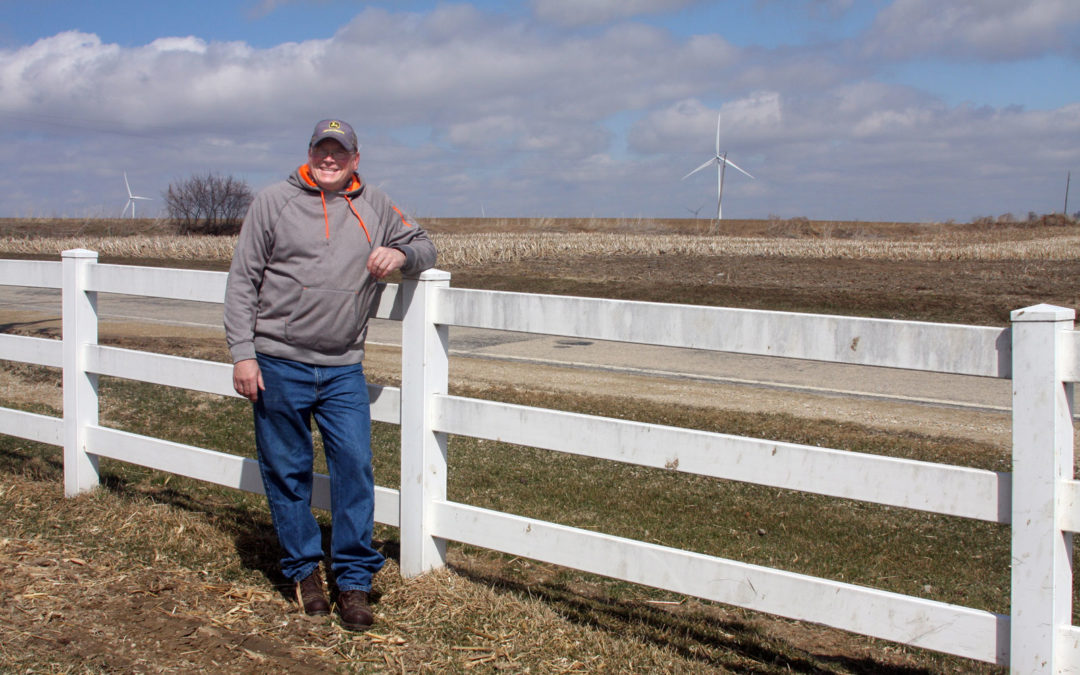 “Renewable energy is simple. It’s ancient technology. What was the first thing that came to this landscape 150 years ago? Wind mills to pump water. They were all over the place. They were needed to get water. These [wind turbines] are needed to run all of our electricity. It is the same thing, just a bigger scale.”

Tim McComish in many ways is the epitome of a Wisconsin farmer. He’s friendly, smart, and practical. His farm sits on 2000 acres in Lafayette County in the Township of Seymour, where he is also the Town Board Chairman. He has 250 dairy cows, grows crops, and now hosts a wind turbine that is part of the Quilt Block Wind Farm. 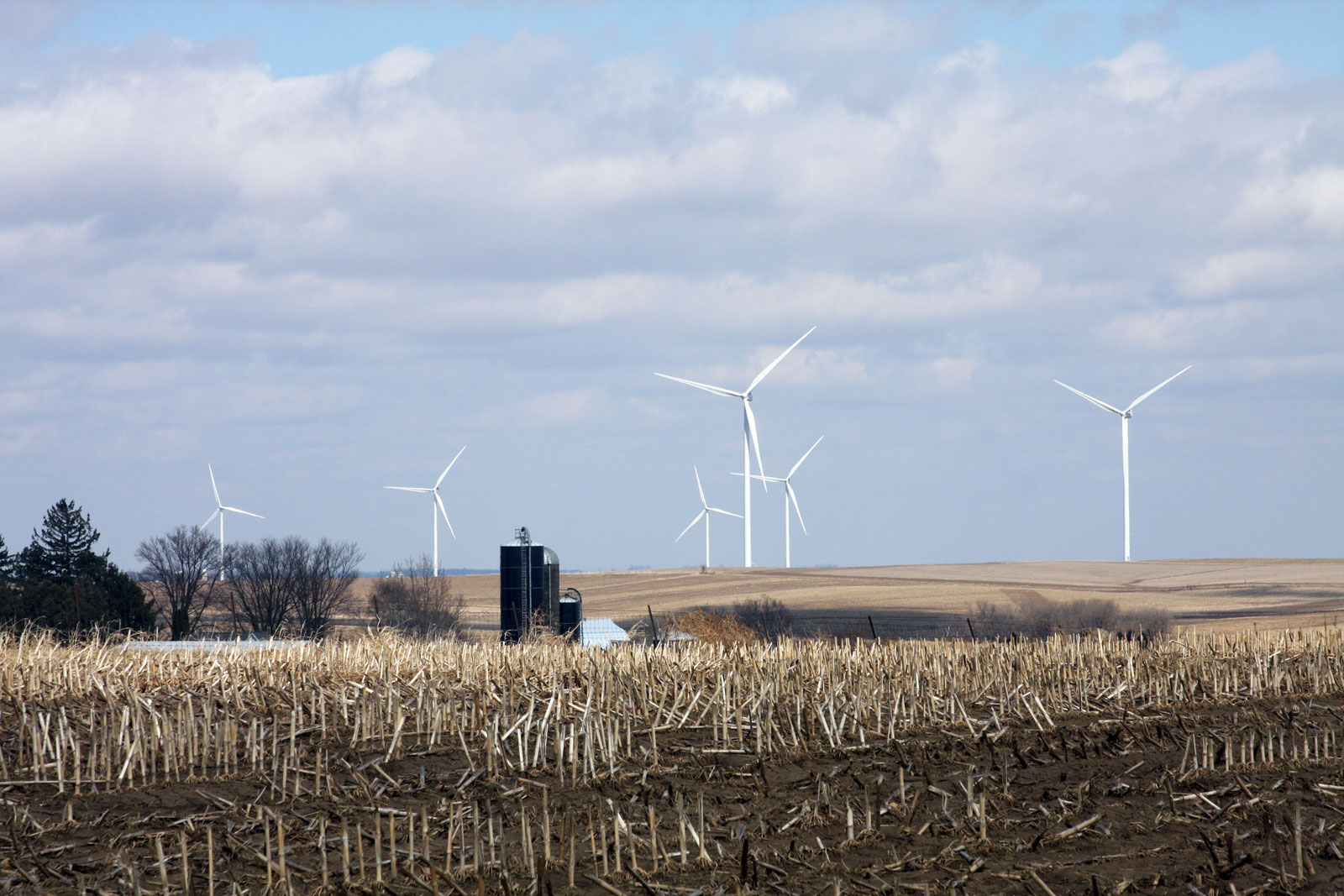 His great, great grandfather purchased the land in 1848. Now, Tim, his sons, and his brother are farming the land. They are also shepherding in the next generation of farmers, his grandkids. The McComish Family Farm is a seven generation operation.

Given the McComish history with the land and his leadership in the town, hosting the Quilt Block Wind Farm was not a decision that Tim took lightly.

“I was concerned that they [wind turbines] would be overwhelming. But I thought it was a neat thing and the economy was kind of poor then. And then meanwhile, grain prices went up and so people were not that concerned about it. Now things are back to how they were and believe me, there are farmers out here that these turbines are helping. If they have several on their property, it is making a big difference. And being on the town board, it is great what it is doing for the township.” 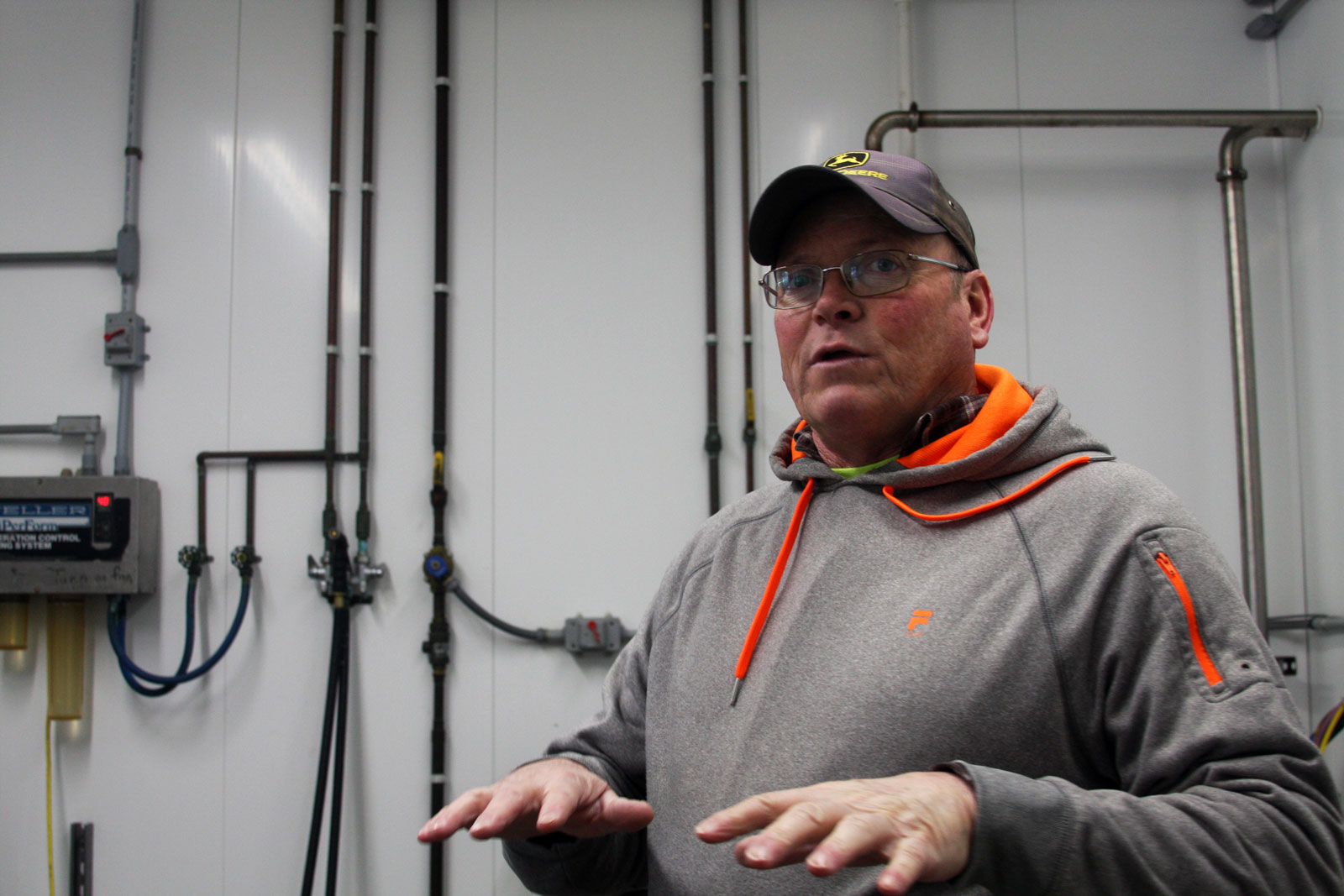 Tim’s support of renewable energy goes hand in hand with his stewardship to the land and his investment in energy efficiency on the farm.

“You have to do everything you can do to make the farm efficient. Most farmers are making those smart choices. With the energy rebates for the LED lights, it’s a no brainer. Everything we do around here is a cost savings.”

The McComish Farm efficiency measures even extend to water. Water is used to cool the milk initially which reduces the amount of Freon needed later. This same water exits the milking parlor through an underground tank and is reused to water the cows in the barn.

“These energy efficiency measures have all happened in the last 10 to 12 years. We doubled in herd size and our electric bill stayed the same. Just efficiencies. All these LED lights, even the vacuum pump.”

The McComish Farm no-tills just about everything, including corn and beans. This keeps all the carbon in the ground. The soil is tested so they know what the NPK (nitrogen, phosphorus, and potassium) is. They can knife in manure and it saves on fertilizer cost for the next year. 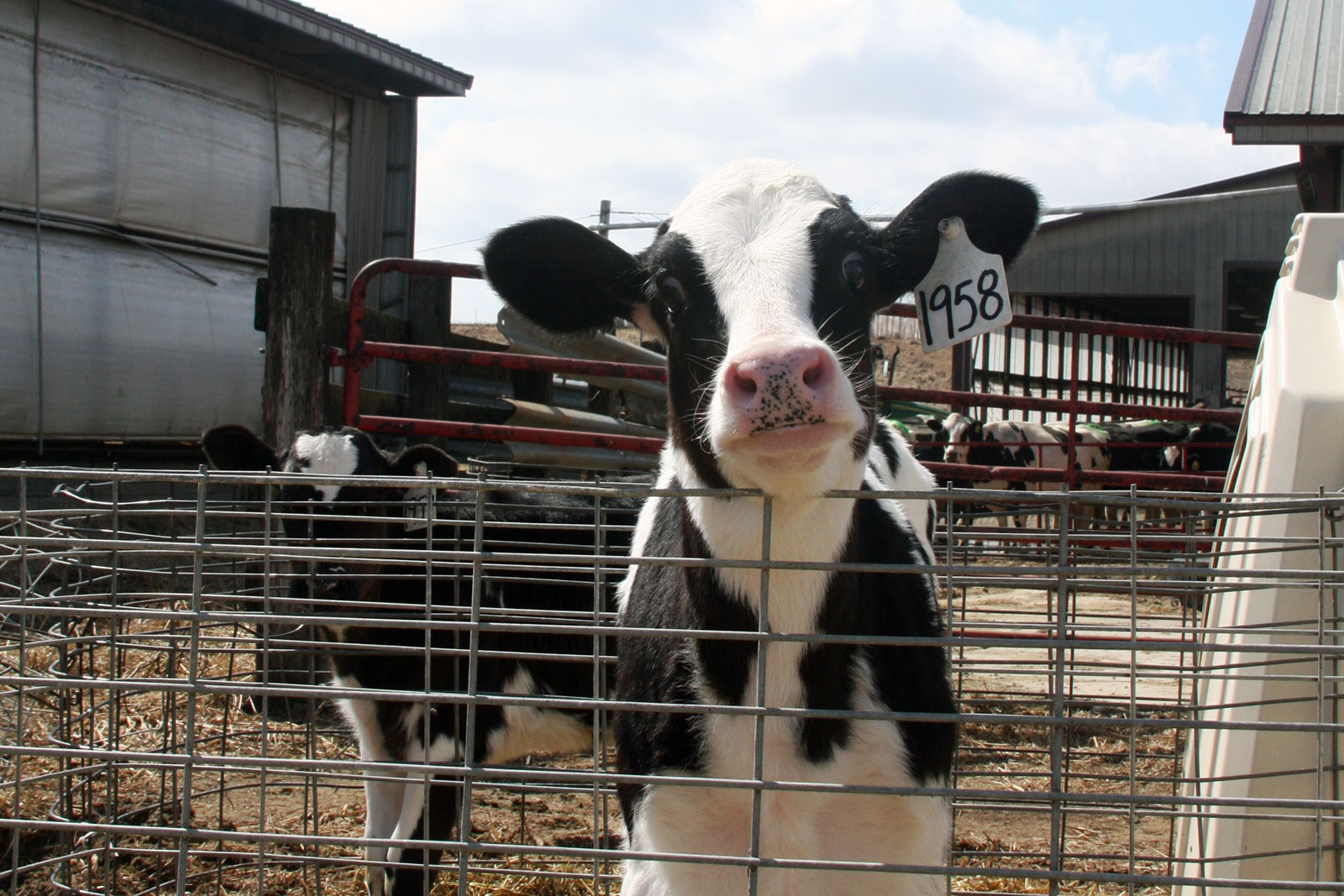 The McComish cows are beautiful. You can follow them in pictures on his daughter in law’s Instagram feed: cows_kids_and_cheese. The calves (mostly Holstein) are fed three times a day and when they are three months old, they are hauled to a neighboring farm where they are raised until they are about a year old, when they are brought back to breed. They calf about nine months later. 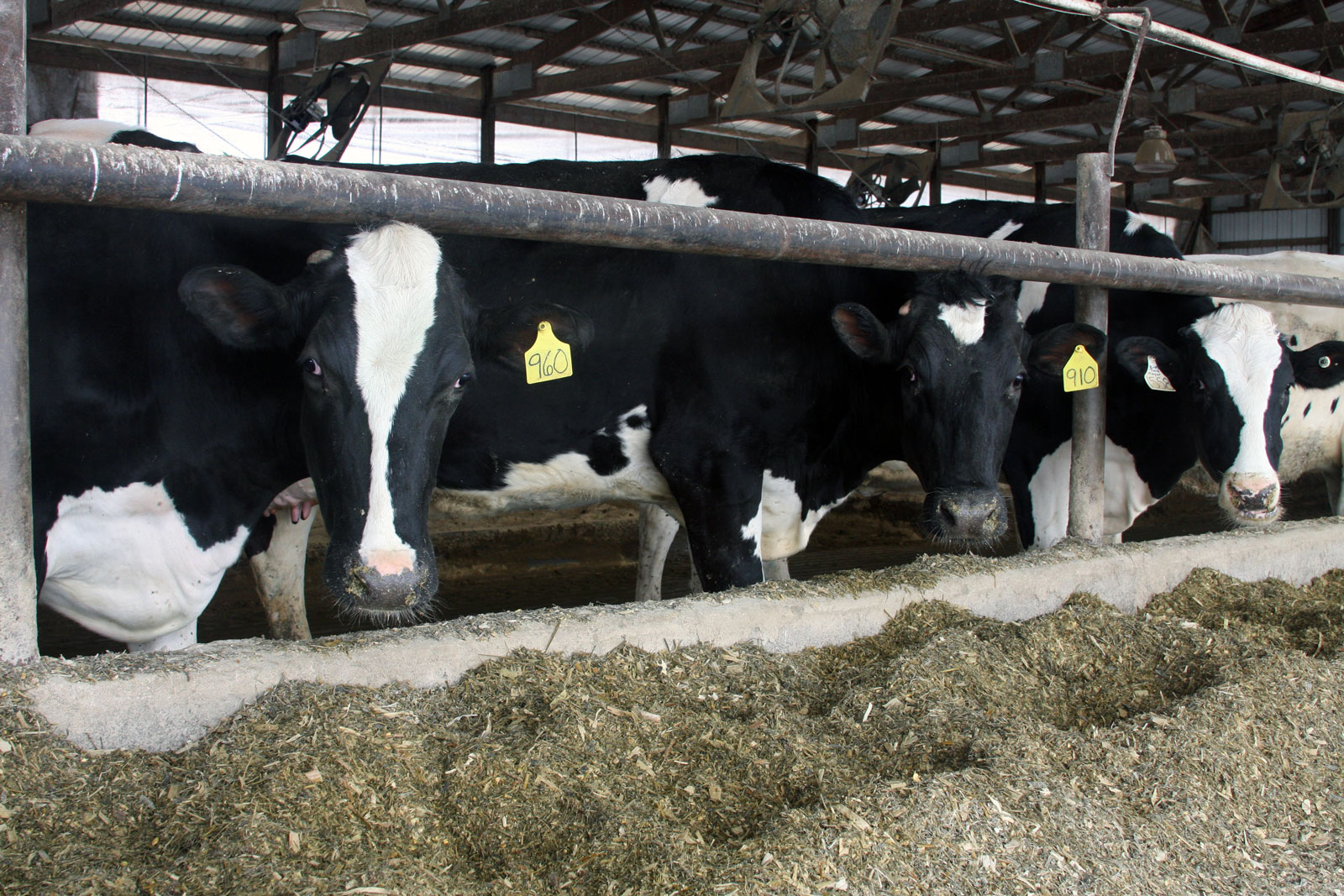 In the higher production barn the cows are all at their peak. The feed, silage, and ground corn are all mixed. The feed is tested in a lab so they are sure the cows have every nutrient they need. They grow everything except some of the protein sources they buy. They buy distillers grain which comes from ethanol plants. Everything is farm grown.

The cows have free stalls and can move and eat whenever they want. They have fresh water and sand is brought in every week because it is a forgiving bedding for the cows. In the summer, there are sprinklers to cool the cows off.

As with most farms, the manure from the cattle goes back into the field as fertilizer. There is a big lagoon that holds 2 million gallons of manure that gets pumped through a big drag line to the fields two or three miles away. “It is all environmentally friendly.”

Tim points to a dumpster overflowing with plastic. 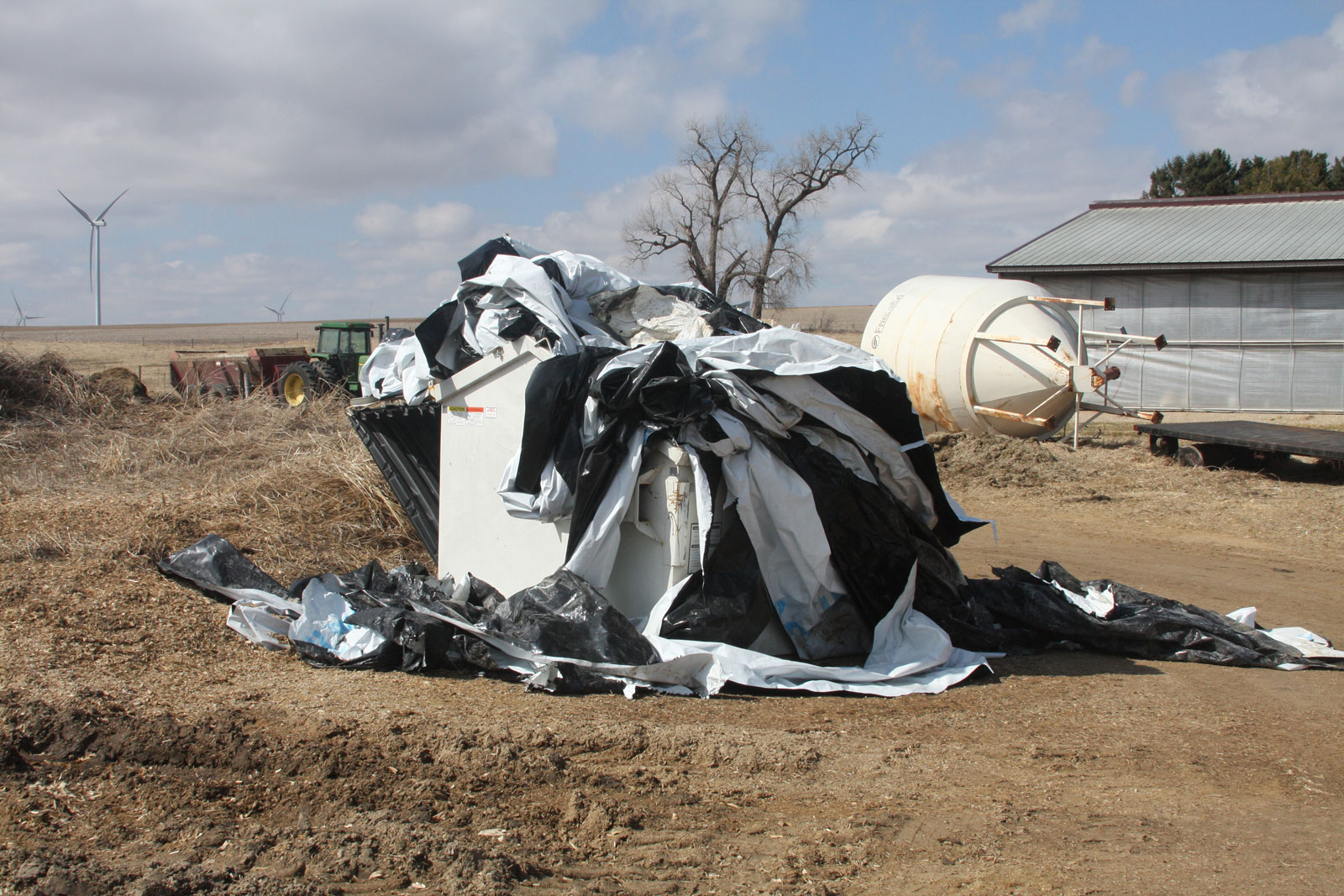 “See that ugly dumpster? That is supposed to be emptied but because of the trouble we are having with China and the trade recycling, they are not picking up our plastic. It has been two or three months since they have taken it. That plastic has always been recycled. I am recycling nut and I want everything to be used up.“

While Tim only hosts one turbine, his property is right in the middle of the 49-turbine Quilt Block Wind Farm covering a 6 square miles radius. The turbines have become a part of his rural landscape. 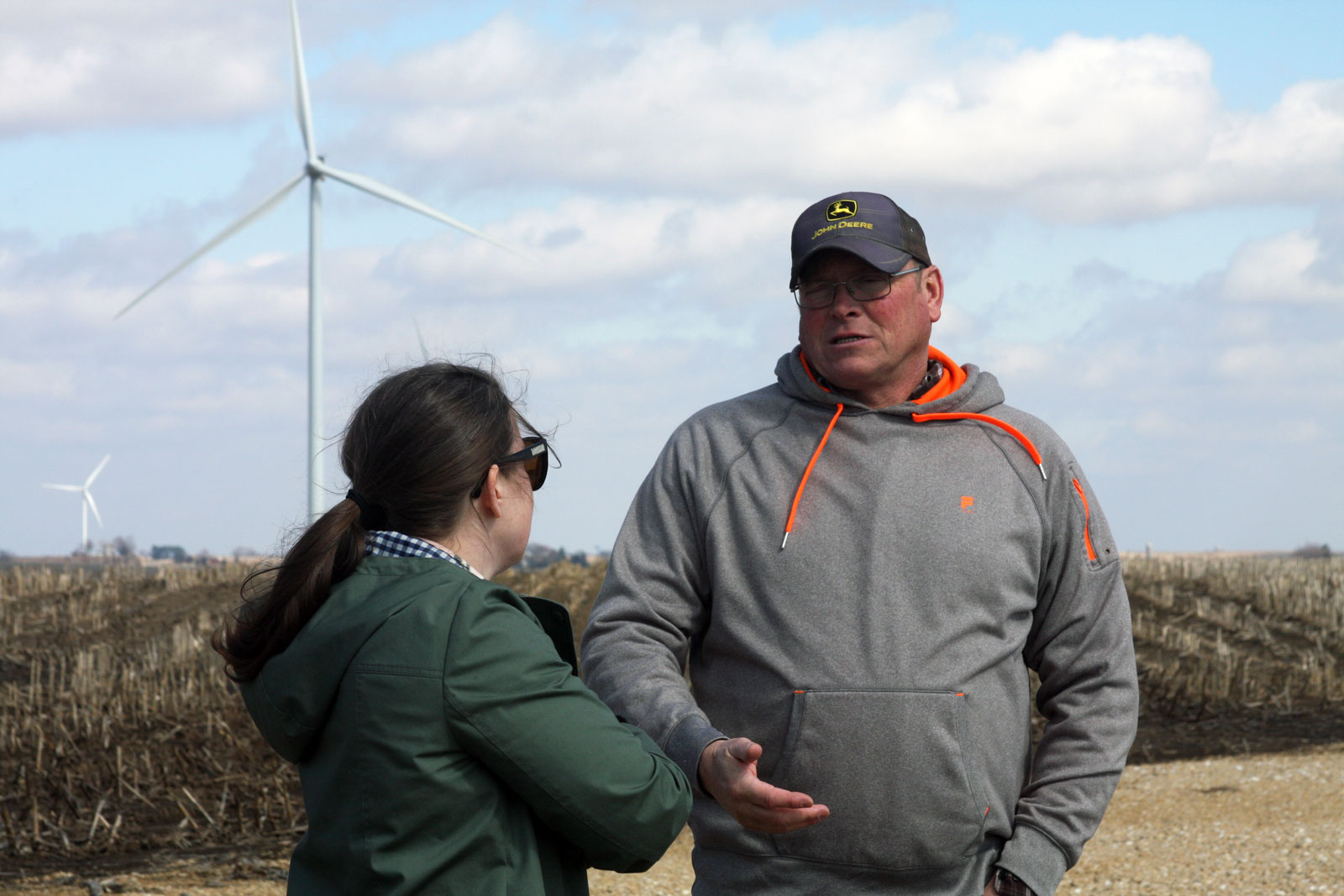 “I’d say I only see the flicker half the time, and it depends where you are. Most people, if the sun is coming in that hard they’ll shut their shades and won’t see the flicker then. It is really not something to be concerned about. The planes that put fungicide on the crops just fly right around them. And as far as dead birds, I guarantee you’ll count more dead birds a mile down the road than under the turbines. It’s just a farce. Anyone who is concerned about noise, here we are carrying a conversation.” 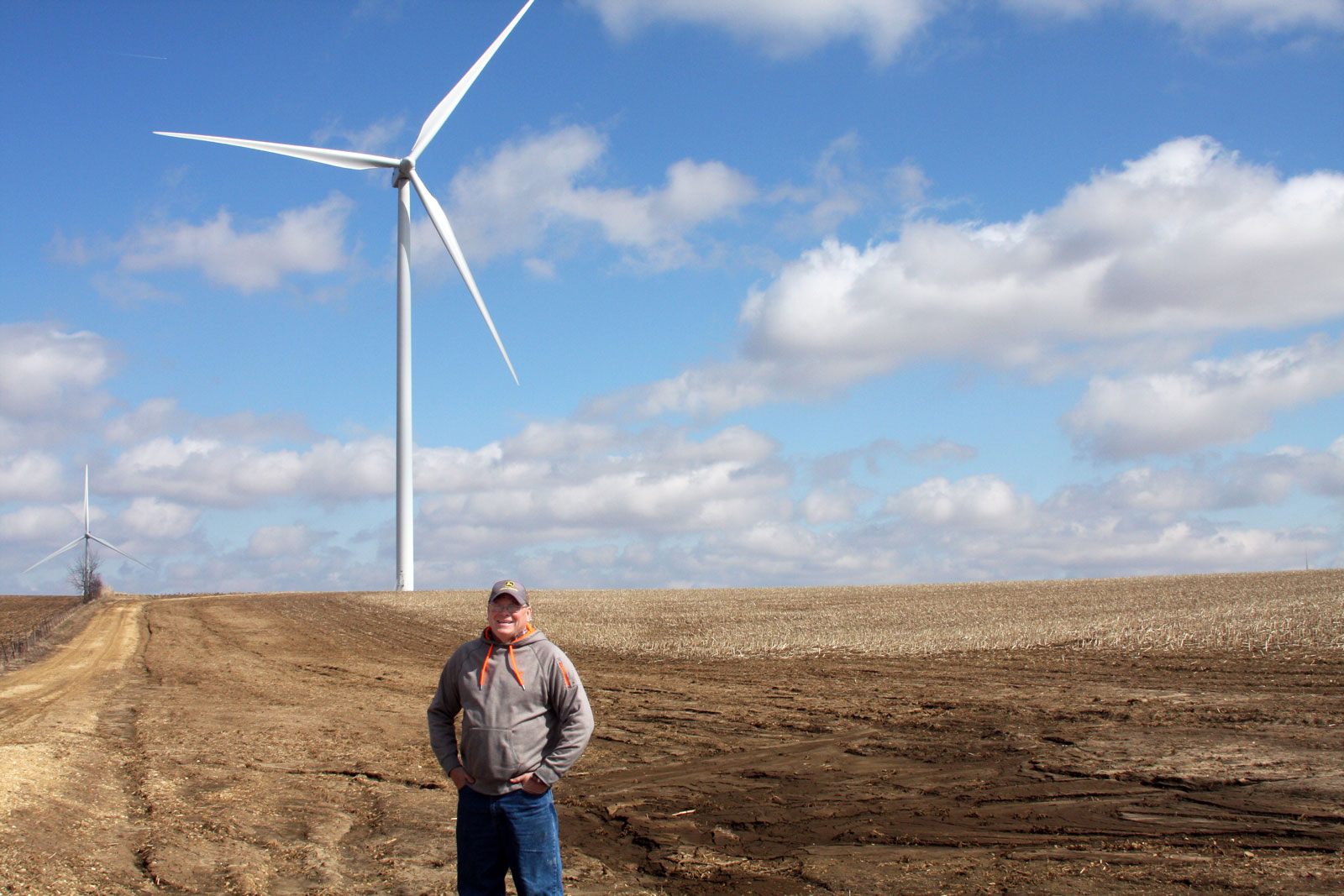