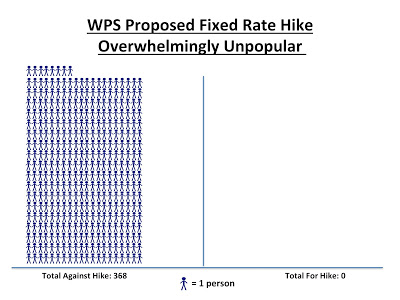 Nearly 370 people made public comments. None support
this policy change.
Wisconsin Public Service Corporation (WPS), a utility based in Green
Bay, proposed in May to further increase the mandatory fixed charge for
electricity that each residential customer has to pay each month.  In 2014, WPS was approved by state regulators
to raise this fee from $10.40 to $19, and they are now proposing to further
hike the fee to $25 per month.

In total, this represents a 140% increase in the monthly mandatory “fixed charge”
that each customer would have to pay.

Nearly 370 individuals spoke out against this proposal. Of
significant note, not a single individual or organization who took the time to make a
public comment is in support of these higher mandatory fees. Public comments were accepted online
electronically, in paper format, and taken at a public hearing on September 9th
in De Pere.

In the public
comments, a wide variety of concerns were aired, from seniors, low-income,
fixed-income, energy conservation, and renewable energy perspectives. These
perspectives can be seen from sample comments included below:

– “The senior community often live on the edge. With expenses for food, rent,
medications & utilities constantly rising, saving money to pay these bills
is extremely difficult. It is impossible
to save on utilities when the base rate keeps rising. Careful usage does
not work in this case. Please be aware of this as you decide what to do with
the current rates. We could sit in the dark & our rates would still
increase.” – Laura Frost, Wausau

– “Even if I turn
down my heat, turn off my lights, and convert to solar or wind power I will be
charged the same amount as someone who doesn’t make any of those efforts.”
– Janis Schmitz, Brussels, WI

– “Every year St. Vincent de Paul runs out of money in their budget that they
have set aside for energy assistance… If
we continue to raise the mandatory rates like this, these organizations that
try to help the poor and the elderly are just going to run out of money,
and they’re going to be left behind without heat.”  – Jackie Thiry, Green Bay

– “What about all the people on fixed
incomes? They often have to forego medications to pay utility bills.”  – Geri Deprey, Green Bay

– “The increase in the mandatory
customer charge and the modest reduction in energy rates hit low electricity
users harder than high electricity users….
It is contrary to state energy policy. Wisconsin`s energy priority law
states that to the extent feasible and cost-effective, electricity needs should
be met first with energy efficiency and second with non-combustible renewable
energy like solar. By reducing one`s savings from pursuing conservation and
clean energy alternatives, this billing design encourages increased consumption
of fossil fuels.” – Christine Morrissey, Appleton

– “I am living on a fixed income. I am 73 years old. I am already struggling to
keep up with my rent, day to day needs and my electricity as it now stands. You will create a very uncomfortable and no
win situation for me if I have to keep coming up with more money. I am
required to keep my electric current to continue living in my apartment. I have
no where else to go if I get evicted.” – Judith Specht, Green Bay

– “My family lives on my disability payment alone, as my wife must spend the
majority of her time tending to me. Anything
that impacts our budget has an extraordinary effect on our lives, literally
taking food from our table. Please consider all of the families like ours
that will be effected by this proposed rate hike, if it is granted. Thank You.”
–Scott Horton, Oshkosh

“I believe that we are paying enough. Period. I live
and work in a rural area. Many of my students struggle for basic needs. How can
you justify another raise in our rates? When is enough–enough?
We are talking basic necessities — we
need light, we need heat. Our incomes are not keeping pace with the increases
that are forced upon us. Please, stop.”- Jann Sharpe, Oconto

Analysis by RENEW Wisconsin shows Wisconsin is an outlier on this issue.  “Although 35 utilities across 19 different
states have proposed increases in mandatory fixed fees in the past two years,
only in Wisconsin have large hikes been granted.  Fourteen utilities have been denied entirely,
while eighteen have been granted small increases, from $0.10 to $4.30 a month
for customers,” concluded RENEW’s Tyler Huebner. 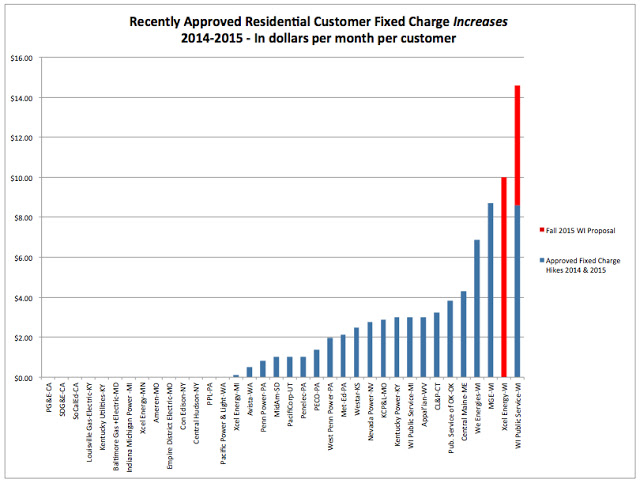 The graphic above depicts 35 investor-owned
utilities which have requested increases to the monthly fixed charge each
customer must pay in 2014 or 2015.  The
14 utilities on the left-hand side were completely denied their request to
increase the charge.  The middle 18
utilities were granted increases from $0.10 to $4.30 per month.  To the right, the three largest blue bars,
all for Wisconsin utilities, show higher fixed charge increases of $6/month and
more.  The two red bars depict 2015
proposals from Wisconsin utilities. 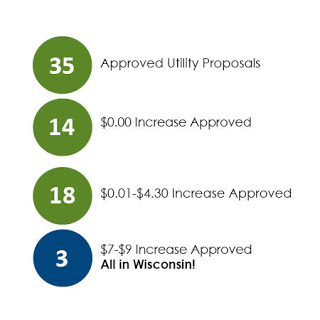