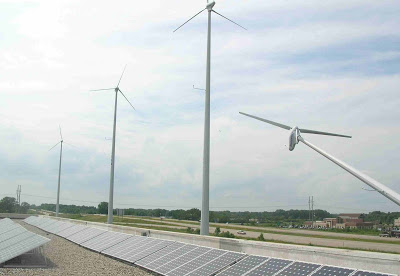 With three turbines set, crews raise a fourth one beside the SCA Tissue office building in the Town of Menasha.

From an article by Michael King in the Appleton Post-Crescent:

TOWN OF MENASHA — SCA Tissue is at the forefront of renewable energy applications and looking for more opportunities.

On Monday, the papermaker installed the first of four 100-foot-tall, 20-kilowatt wind turbines outside the SCA Tissue Service Excellence Center offices at 1451 McMahon Drive as part of a $300,000 project. The turbines with the 15-foot blades tower over the building, which has rooftop solar panels that were installed a few years ago.

“This is the first commercial wind (turbine project) in the town,” said Mike Dillon, SCA Tissue manager of environmental and risk management. He said SCA once again turned to local firms to aid its latest renewable, or “green” initiative.

“The turbines are the first commercial units built by a new Oshkosh company called Renewegy,” he said. “Faith Technologies in Menasha is doing the electrical work and the foundation work for the towers was done by our neighbor, Miron Construction.”

Once in place, the four turbines will produce 100 to 125 megawatt-hours annually, enough to power 10 to 12 homes each year, but the electricity is being used exclusively in the office building, Dillon said.

“We’re actually going to consume every bit of (electricity) in the building,” Dillon said. “This is a continuation of our work with renewable energy, looking at new technologies and improved technologies. It’s another piece of a (renewable) portfolio we’re trying to develop.”

SCA Tissue already is looking at solar and wind power options for its converting facility on Ehlers Road in the Town of Menasha and for its Menasha paper mill, along with SCA facilities in Arizona, New York and Alabama.