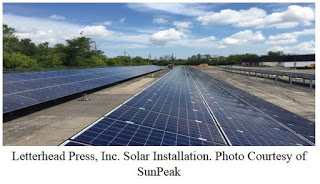 In yet another demonstration of solar energy’s growing appeal to commercial and industrial customers, Letterhead Press recently joined the growing roster of Wisconsin companies turning to the sun to power their operations.

Located in New Berlin, Letterhead Press now derives about 25% of the electricity consumed at its 120,000-square foot facility on Ryerson Road from a 300 kilowatt (AC) solar array. Situated on a parking lot behind the production facility, Letterhead’s array was the fourth largest solar system installed in Wisconsin last year (see table below), and is now the largest in Waukesha County.

Solar was the fastest growing generation resource in Wisconsin in 2015, expanding from 18 megawatts (MW) at the beginning of the year to more than 25 MW at year’s end. Solar power expanded even more vigorously elsewhere in the United States, with 7,500 MW–the equivalent of Wisconsin’s increase 1,000 times over–coming on line last year.

In addition to being a cost-effective source of electricity for business and institutional customers, solar power supports a national industry that employs more than 208,000 people, according to the most recent solar jobs report conducted by The Solar Foundation. Solar industry employment grew 12 times faster than the overall U.S. workforce. About 1,900 solar jobs are located in Wisconsin, according to the previous year’s report.

Letterhead Press will be one of several dozen solar generation owners recognized at RENEW Wisconsin’s fifth annual Renewable Energy Policy Summit set for Thursday, January 21, 2016, at Monona Terrace in Madison. The theme of the event, “Shaping the Utility of the Future,” will delve into the rapidly changing electric utility environment and examine business models under which utilities and customers can work bring more clean energy into the Wisconsin energy mix.