The wind siting rule, which was promulgated by the Public Service Commission (PSC) in December 2010, specifies the strictest siting requirements that a local government can place on a wind energy installation up to 100 MW in size. The relators and builders filed a lawsuit in 2011 to invalidate the rule, contending that the PSC failed to consider the impact of wind generation on the state’s housing market. But their argument failed to persuade a Brown County circuit court, and that judge’s decision was upheld twice, first by the Court of Appeals and, finally, the state Supreme Court on a 5-2 vote.

As Tom Content’s article in the Milwaukee Journal Sentinel points out, the decision will have no immediate effect on windpower development in Wisconsin, as there are no pending projects under review by a local government, nor are there any under construction. As the table below demonstrates, wind development in Wisconsin lags behind neighboring states by a substantial margin. 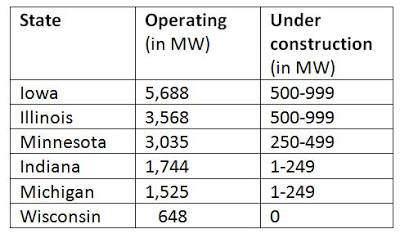