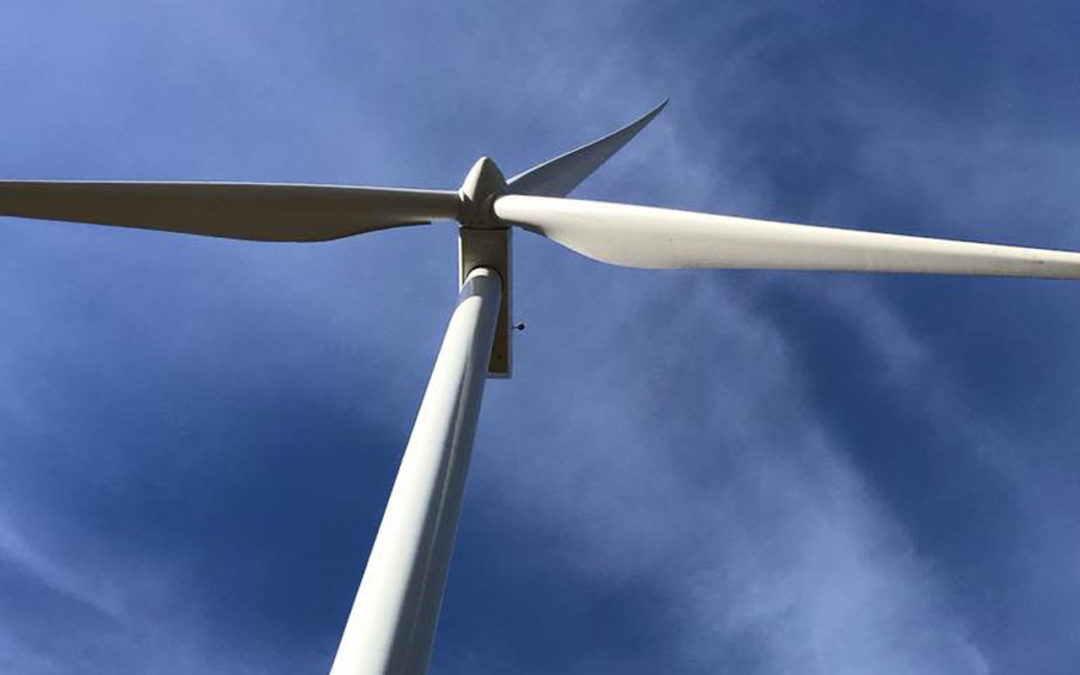 After a prolonged absence from Wisconsin, wind developers are starting to come back to the Badger State with a desire to build projects. EDF Renewables, a nationally prominent renewable energy developer, has applied to construct and operate Green County’s first wind farm near the Illinois border. Called the Sugar River Wind Farm, this 24-turbine project would, if approved, generate an amount of electricity equal to what 20,000 households typically consume.

The Green County Board of Supervisors will review EDF’s 236-page application, which was submitted in late January, and will likely make a decision on the 65-megawatt project in July.

To accommodate the turbines, EDF envisions leasing almost 6,000 acres of farmland in the Town of Jefferson from area property owners.   Participating landowners expect to continue farming operations while the wind farm operates.

As with other wind projects, the Sugar River Wind Farm will have a significant impact on the local economy. According to the application, more than $550,000 will flow to local landowners and governments each year during the project’s operation. Of that total, Green County and the Town of Jefferson will reap a combined $250,000 annually in the form of utility local aids.

Jefferson Township’s annual tax revenue income could increase by nearly 40% over 2019 levels as a result of this project.  The project will also support 70 to 100 temporary construction jobs and three to five operations jobs over the life of the project.

If approved, Sugar River would be the second major wind energy development in Wisconsin to advance after a protracted lull in wind development activity that lasted between 2011 and 2017.  Between a hostile political environment and a glut of generating capacity, utility-scale wind development activity languished in Wisconsin. During the dry spell here, developers flocked to neighboring states to tap into one of the most cost-effective clean energy sources available to utilities. The door reopened slightly when Dairyland Power Cooperative agreed to purchase electricity generated from Quilt Block Wind Farm, which started operating in November 2017.

Located in Lafayette County, Quilt Block has been hailed as a success by community leaders from the Town of Seymour and the City of Darlington.

“The Quilt Block Wind Farm in Darlington is a great asset to the City of Darlington and to Lafayette County,” said Darlington Mayor Dave Breuning.  “During the construction, the employees were great to work with and they were very supportive of the retail businesses in Darlington.”

Mayor Bruening noted that Quilt Block’s labor force drove Ford trucks and had their vehicles serviced at the local auto dealership. Employees patronized area grocery stores and gas stations, and took their printing work to the local print shop, he said.  “And then the Quilt Block Wind Farm built the office and garage in the Darlington business park.  What a great addition to the City!”

Wind projects have become increasingly productive, as turbines are designed to be taller with longer blades to capture winds higher up in the sky that blow at faster speeds.  “There’s an old physics equation that says when you can double the speed of the wind you are catching, the power that you’ll produce goes up eightfold,” Tyler Huebner, Executive Director of RENEW Wisconsin. “It’s a cubed relationship.” As the technology improves and wind farms become more cost-competitive, developers are working again in Wisconsin and coming forward with new proposals.

When it took effect in 2012, Wis. Admin. Code § PSC 128 established the formal process that all local governments must abide by when reviewing permit applications for wind farms under 100 MW. The rule also set standards that local governments may apply to the placement of wind turbines as well as their construction and operation. Local governments have the option of adopting, for example, setback distances that are less stringent than the baseline standards in PSC 128. However, they may not impose standards that are more stringent than those specified in that rule. Wind energy projects in excess of 100 MW are reviewed by the Public Service Commission.

Green County has 90 days from the date of the application (Jan 30, 2019) to adopt a wind energy ordinance and an additional 90 days to review and approve the proposed project.  At its March 12, 2019, meeting Green County Board of Supervisors will consider a resolution to adopt a wind ordinance.  Wind energy projects that aren’t approved by the County within the two consecutive 90 day periods after an application is submitted are automatically approved.

How Can I Support Wind Development in Green County and Wisconsin?

Green County residents can send an email to the Green County Board of Supervisors. Their contact information is available here.

Learn more about wind.  A report titled “Wind Turbines and Health” was recently issued by three organizations: the Environmental Health Sciences Research Center (which exists within the University of Iowa College of Public Health), Iowa Policy Project, and Iowa Environmental Council. The report summarizes the results of the most rigorous research available on the benefits and risks related to wind power.

Join RENEW’s information session about wind power on March 25, 2019, at 5 pm at the Monroe, WI Super 8 Motel.  Enjoy refreshments and hear from the Mayor of Darlington and his colleagues talk about their experience in Lafayette County with the Quilt Block Wind Farm.

*This blog post was written by Heather Allen with contributions from Michael Vickerman.