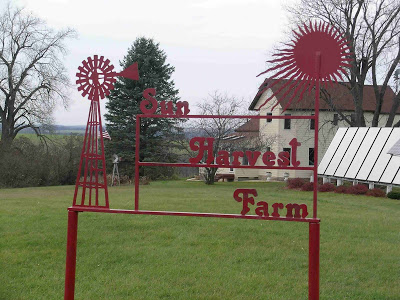 The Koerner’s installed the domestic hot water system (right)in March 2006. It also provides a portion of the heat for the house.

General:
In 2005 we embarked on major renovations and additions to our old farmhouse. This included working with Focus on Energy to have site assessments performed for Solar Photovoltaic, Solar Thermal and Wind Turbine Systems. We also investigated wood burning systems because we have substantial quantities of firewood on our property. Our decisions included the following:
1. Add additional insulation, all new windows and new doors.
2. Replace our old oil burning furnace with a high efficiency propane boiler (our little Munchkin).
3. Install a Solar Photovoltaic grid-connected system to produce electricity.
4. Install a Solar Thermal (hot water) system to preheat domestic hot water and provide some house heat.
5. Install a counter-flow masonry heater fireplace using our own limestone for the masonry cladding.
6. In 2008 we built and installed a hot air collector to provide some heat in our barn workshop.
7. In 2009 we installed our 2nd Photovoltaic grid-connected system.
8. In 2009 we also upgraded our solar hot water storage tank.

Improving Efficiency
Our first goal was to improve the efficiency of the areas in the old part of the farmhouse, and to include very high efficiency within the new addition. We installed new Pella windows and doors throughout. Additional insulation was added where possible and a moisture/air barrier under new fiber cement siding, which was installed on the entire house. The new construction included R-21 insulation in the walls and blown-in R-50 in the ceiling. We removed the old oil-fired hot water heater and the oil burner from the warm air furnace. A high efficiency propane gas boiler (Munchkin T-50) was installed to be our back up for heating and the new domestic hot water tank. We also installed radiant under floor heating in the new great room area and plan to install additional radiant heating in certain of the old house areas. The existing warm air furnace was retained, with the addition of a water-to-air heat exchanger, which allowed us keep the central AC unit and also to provide warm air heating to the upstairs area. We have also installed compact fluorescent light bulbs throughout the entire house and in the barn workshop area.

We worked with Light Energy Systems of Madison (now Full Spectrum Solar) to design the system and to provide the parts and some of the labor. The total system cost was approximately $20,000, but we received a Focus on Energy grant of $3,000 and a Federal Tax Credit of $2,000 so our out-of-pocket costs were about $15,000.

During 2009 we decided to replace the concrete tank due to excessive moisture problems in the basement area. We demolished the tank piece by piece and carried it out of the basement. We replaced it with a tank made by STSS Co. Inc from Mechanicsburg PA. The new tank is collapsible so it can be moved through regular sized doorways. When in place it will be 80 round and 4 high with all penetrations installed at the factory according to our heat exchanger specifications. It is sealed, insulated and with hold up to 822 gallons of water. We reused the copper heat exchangers that we had made for the old tank. We also installed a heat dump under the solar collectors, which was made of 24 ft of Slant Fin baseboard hydronic registers. The purpose of the heat dump is to dissipate excess heat produced during the summer when we only use the hot water for pre-heating the domestic hot water. The total costs for the new tank, including demolishing the old tank, were about $3,500.

Masonry Heater Fireplace
We investigated wood-burning systems and decided to build a masonry heater fireplace in order to take advantage of renewable resources on our property. We have an ample supply of trees on our property that we harvest by cutting dead trees. We constructed a woodshed that dries and stores about 10 cords of split firewood.

The fireplace is specially designed to be efficient and environmentally friendly because the combustion chamber burns at between 1500-2000 degrees F. The fire burns for 2-3 hours but the large amount of masonry mass stores and radiates the heat for 12-24 hours. Our fireplace is centrally located so it radiates heat over a large area of our kitchen and great room. Two stainless steel U-Tube heat exchangers are also built into the core to capture some heat, which is circulated to the solar storage tank in the basement.

The core of our heater was designed by Heat-Kit of Canada, but originated centuries ago from designs in Europe and Russia. Gimme Shelter Construction of Amherst, WI constructed the core.

We decided to use natural limestone and sandstone from our property for the masonry cladding. Some of the stones were recovered from the foundation of our old summer kitchen. We performed the masonry work ourselves, which saved us $20,000+ in labor costs. Our cost for the core, chimney materials and mortar for the limestone was approximately $12,000.

Solar Photovoltaic Electric System # 1
This system was designed to produce about half of our annual electricity needs and was put into operation in April 2006. We chose a grid-tied system that sends excess electricity to the Alliant Energy power grid. We have a net-metering agreement where we are compensated for the power we produce at the same rate as we pay for electricity. During the first full year of operation our PV system produced 4,700 kilowatt-hours, which was 43% of our total usage of 11,100 kWh.

Our system produces between 200-600 volts (DC current) when the sun shines. It is facing east when the sun rises and follows the sun all day so it is facing west when the sun goes down. The DC current comes into the basement, goes through a disconnect switch and into the Sunny Boy inverter/controller. This device changes the DC current into AC current and controls how the power goes out into the grid. The current goes outside through a disconnect switch, back through our main breaker panel, and then out through the meter to the grid. The best days are when we are not using much power and the meter is actually going backward!

We worked with Light Energy Systems of Madison (now Full Spectrum Solar) to design the system and to provide the parts and some of the labor.

Solar Photovoltaic Electric System # 2
In 2009 we installed our second PV system. We took advantage of a special program from Alliant Energy where we have contracted for 10 years to sell all of the power produced by the system for 25 cents per kWh. It did require us to install a new meter pedestal, at a cost of $1,100 so that the electricity from the new system could be metered separately. We also have to pay about 41 cents/day for the new meter charge, as well as sign up for the Alliant Second Nature program (where we pay a small premium for our energy purchased, which will be from renewable sources). Our total cost for the system was $31,168, and we did some of the work ourselves (digging, concrete, trenching, wire, etc). We will get a 25% Focus on Energy grant of about $7,800 and a 30% Federal tax credit in 2010 of about $9,300. Therefore, our out of pocket costs will be about $14,000. This system has the potential to produce about an 11% annual rate of return.

We purchased the main part of the system from DH Solar. Their system uses a tracking system that they adapted from their experience with commercial satellite tracking systems. The system has 16 Suncast PV panels, each of which is rated at 210 watts, or a total of 3.36 kW. The inverter is a SMA Sunny Boy 3000US.

Barn Workshop Hot Air Collector System
In 2008 we designed, built and installed a hot air collector system on the south side of the old milkhouse. The collector was made from tempered glass, aluminum expandable tubes, painted black, and solid foil-faced insulation. The 6 outlet and inlet piping contains a bi-metallic sensor/control relay and a small in-duct fan to pipe the heat into the barn workshop. The total cost of this system was about $600. A woodstove in the milk house provides backup heat on cloudy days, which is piped with the same piping system into the barn. This is a trial and error system. It looks like we might have to reposition the system to more directly face south to maximize the heat output.