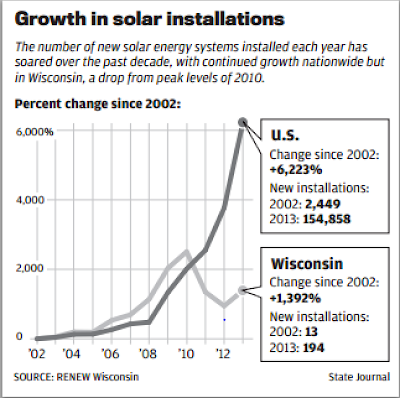 The Wisconsin State Journal also wrote about how We Energies also faces opposition for its proposed rates. According to RENEW Executive Director Tyler Huebner, this proposal is “as drastic as any proposal nationally.”

We Energies has dropped its protest over groups participating in its rate case, something Tyler Huebner says “can [give] the best possible look at not just the costs but also the many benefits of local renewable energy.”

The rate filings presented by these utilities are “ultimately…about fairness,” according to Bill Skewes of the Wisconsin Utility Association. Matt Neumann, owner of Pewaukee-based SunVest Solar, agrees, stating “it should be the customer’s choice. It’s their property. It’s their rooftop….people should have the choice of how they want to finance things on their own property.”

Does Wisconsin really have a fair renewable energy policy? Decide for yourself.