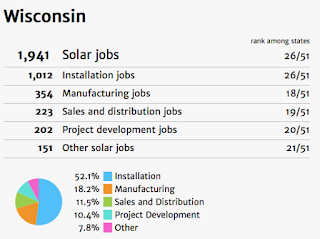 Wisconsin’s solar industry employs 1,941 workers according to the Census, across installation, manufacturing, sales and distribution, project development, and related sector employment.  That places Wisconsin 26th nationally for the number of solar jobs in the state, and 27th nationally in solar jobs per capita.

The full state-by-state report can be found at http://solarstates.org/, where there is a national map and each state’s data can be accessed.

Milwaukee, Waukesha, and Dane Counties are the three counties with the largest number of solar jobs.  Installation jobs account for over half of the total in Wisconsin.

Nationally, the industry grew again at a 20% clip to over 208,000 workers. The report shows there are now three times as many solar workers nationally as coal workers.

“Wisconsin’s economy will benefit from improved rules and regulations to unlock solar energy’s true potential – rules like better net metering policies, clarifying third-party ownership (solar leasing), and interconnection policies that govern how simple it is for a home or business to connect solar to the local utility grid,” said Huebner.

The Solar Foundation report shows that Wisconsin gets a “D” grade for both net metering – a policy that determines how a customer is credited for extra energy they produce and put on the local electric grid – and interconnection policies.

Selected images from the Wisconsin page of http://solarstates.org appear below: 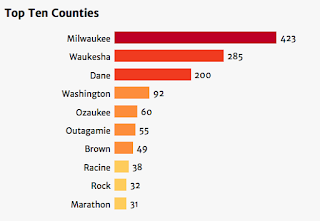 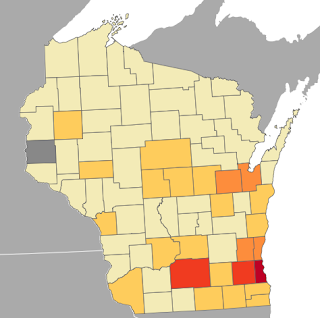