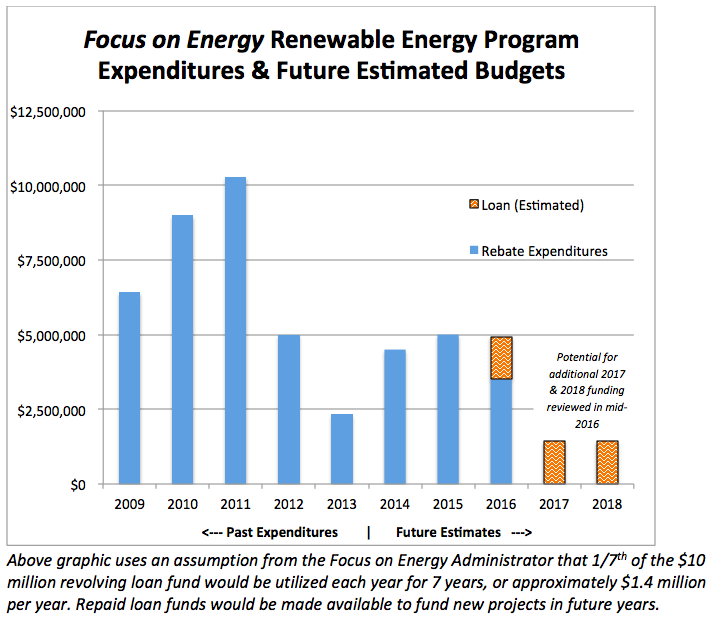 MADISON — In a 2-1 decision made Thursday, November 6, the Public Service Commission approved a four-year redesign of Focus on Energy’s renewable energy program that will offer $5 million in cash-back incentives for qualifying projects in 2015 and $3.5 million in 2016.  The statewide renewables program will also establish a new $10 million revolving loan fund which would start taking applications in 2015 for projects in 2016 through 2018.

The approved plan does not commit incentive dollars to renewable energy projects in 2017 and 2018.  Instead the Commission requested a report in mid-2016 to review funding options for those two years.
Yesterday’s decisions came after Commission deliberations in July which resulted in a preliminary decision to end the cash-back rebates entirely and replace them with a loan program. After discussions with RENEW and other energy stakeholders, the Commission asked for funding options that included a continuation of direct incentives, resulting in yesterday’s vote on the redesigned program.
The renewable energy plan, which was approved by Chairman Phil Montgomery and Commissioner Ellen Nowak, sets a total of $5 million in cash-back rebates for 2015 and $3.5 million in 2016.  In his dissenting vote, Commissioner Eric Callisto signaled his support for more incentives:  $6.67 million in incentives for each year of 2015 to 2018, with a smaller loan program.
Undercutting the impact of the 2015 allocation is the fact that $4.2 million of the $5 million total has already been allocated to projects, leaving only $800,000 in new funding for next year. Approximately $450,000 will be available for solar and geothermal for residential and small businesses in each of the next two years, with the remaining funding towards larger projects for businesses, farms, and nonprofits.
“The renewable energy cash-back rewards have been instrumental in building a market for customers to take advantage of the benefits of solar, small wind, geothermal, and bioenergy projects in Wisconsin for many years,” said Tyler Huebner, RENEW Wisconsin’s Executive Director. “It has helped build a marketplace for these technologies and a robust network of small businesses helping customers in this state.  Over the past four months, RENEW Wisconsin worked with members of the renewable energy business community, the administrator of the Focus on Energy program, and staff at the Public Service Commission to ensure some level of rebates would continue, and we achieved a small victory but not as much funding or the four years of certainty for which we were hoping.”
“It appears only $800,000 in rebates will be available for newly identified projects in 2015, and that is a big concern for our industry,” said Huebner, “because this program has already been hard hit by on-again off-again funding interruptions over the past few years.”

The loan program would be based largely on a successful program in Iowa called the Alternative Energy Revolving Loan Program.  Funds would be lent out from Wisconsin’s Focus on Energy program for very low interest rates for up to 50% of a project’s cost, and matched with a loan from a financial institution at market interest rates for the remainder of the project.  CB&I, the Focus on Energy program administrator, has estimated that 1/7th of the $10 million would be spent each year for 7 years, enabling the payback of the loans to fund additional loans in future years.
The Commission also decided to eliminate the defined split between certain types of technologies.  Over the past four years, biogas and biomass projects received more funding than wind and solar. “Going forward, that defined technology split will be removed as far as RENEW Wisconsin understands, and that is a welcome change,” said Huebner.
Back in July, the Commission also approved a $6 million program aimed at anaerobic digesters for dairy farms.  That program would explore ways to utilize the biogas digester technology on smaller dairy farms.  “Continued investment into biogas is needed so we can identify more opportunities to recover energy and valuable by-products from cow manure, and reduce concerns about runoff and water quality issues,” said Huebner.
Renewable energy is a growing field nationally, with over 143,000 jobs in solar energy alone, according to the Solar Foundation’s National Solar Jobs Census in 2013.  That’s more than the U.S. auto industry and almost 50,000 more than the U.S. coal mining industry.
“We need to continue our focus in Wisconsin on job creation, and the clean energy sector is a job-creating sector.  All we have to do is look to our neighboring states of Iowa, Minnesota, and Michigan to look at the robust job markets in renewable energy.  For example, Michigan was just named the sixth best state nationally for clean energy jobs growth,” concluded Huebner.