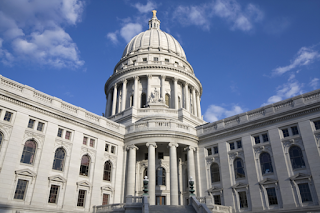 A press conference was held yesterday at the State Capitol to announce the launch of the Wisconsin Conservative Energy Forum, a right-leaning, state-based voice for clean energy.
Headlined by Former Governor Tommy Thompson as a Board Member, the group plans to articulate a positive narrative on clean energy, emphasizing its emergence as a cost-effective source of new jobs and business opportunities.
Scott Coenen, a former staff person for State Senator Howard Marklein, is the group’s Executive Director.
To learn more about this new effort, you can visit the organization’s web site and check out an interview published in Midwest Energy News.
As reported by the Milwaukee Journal Sentinel, “Scott Coenen, the group’s new executive director, insisted the group would be focused not on lobbying for bills but on converting Republicans to the potential benefits — and jobs — coming from technologies such as solar and wind power.”