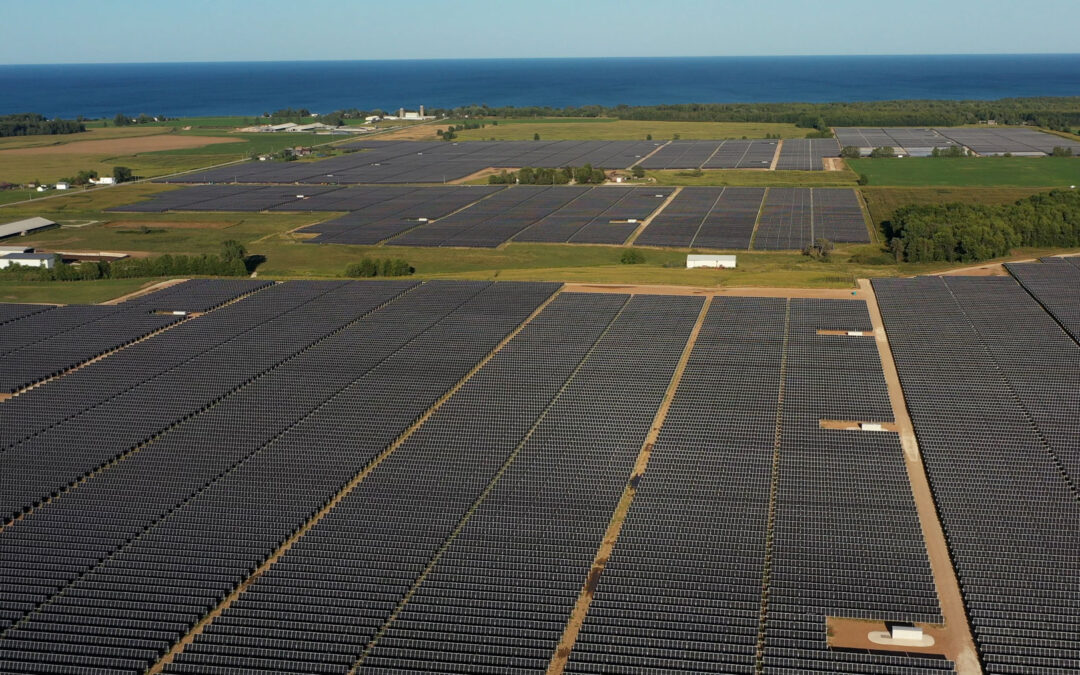 Located next to the Point Beach Nuclear Plant, Two Creeks effectively doubles the amount of solar generating capacity in Wisconsin to 300 MW, and will, over the next six months, produce more electricity than the combined output from all other existing solar systems in Wisconsin. Expected to produce more than 300,000,000 megawatt-hours a year, Two Creeks will generate about one-half of one percent of the state’s overall supply of electricity, which is the equivalent of what 33,000 residences consume annually.

Along with the 300 MW Badger Hollow Solar Farm in Iowa County, Two Creeks received approval from the Public Service Commission (PSC) in April 2019. These two were the pioneering solar farm proposals that navigated through the PSC’s power plant siting process and won approval from the agency. At the same meeting, the PSC granted a joint request from WPS and MGE to acquire Two Creeks.

Since then, the PSC has given the green light to two more solar farms totaling 249 MW in capacity, including NextEra Energy’s 100 MW Point Beach Solar Farm next door to Two Creeks. Point Beach Solar is under construction and should be completed in the fall of 2021.

Construction work on Two Creeks commenced on August 2019, kicked off with a groundbreaking ceremony that drew Gov. Tony Evers and the two utility ceos. Governor Evers’ appearance came less than a week after he issued Executive Order 38, articulating a goal of “ensuring all electricity consumed within the State of Wisconsin is 100% carbon-free by 2050.”

Building Two Creeks was no small undertaking. It involved punching thousands of posts into the ground to support horizontal tracking systems spreading across 800 acres of relatively flat terrain. Mounted on these rotating poles are more than 500,000 panels that follow the sun as it crosses the sky going east to west. Between the first rays of sunlight and the last ones before sunset, these panels soak in the sunshine and convert it to electricity.

A plant like Two Creeks will begin displacing higher-cost power at the moment it is energized, and these savings will grow significantly over the course of its 30-to-50-year life. True, the utilities will need to recover the cost of building the solar farm, somewhere in the vicinity of $195 million. But the savings utilities expect to reap from avoided fossil fuel purchases and pollution control expenditures will more than outweigh their investment in a zero-carbon generation source. Seen in this light, large-scale solar is indisputably the most cost-effective supply option that an electric utility can pursue going forward.

The benefits from Two Creeks extend beyond ratepayer savings. Manitowoc County and the Town of Two Creeks, the jurisdictions hosting the solar farm, expect to reap a combined $600,000 in local aids each year while the project remains in service. That number grows to $18,000,000 over the course of 30 years, which is the projected minimum lifespan of Two Creeks.

Solar is a noncombustible energy resource that does not emit any gaseous emissions or particulates when converted to electricity. Deploying solar at the scale of Two Creeks will capture significant public health and air quality benefits by avoiding emissions that are associated with conventional fossil generation plants. In another PSC proceeding involving a 15O MW solar farm in eastern Wisconsin, the developer anticipates annual emissions reductions in the following categories of pollutants: (1) nitrogen oxide (NOx) emissions by 195,000 pounds; (2) methane (CH4) by 20,000 pounds; (3) nitrous oxide (N2O) by 5,000 pounds; and (4) carbon dioxide (CO2) by 405 million pounds.

Decarbonizing the state’s fleet of power plants is also a job creation strategy. The PSC estimates that somewhere between 200 and 300 jobs were created during the project’s construction window. It’s quite likely that many of the workers involved in the building of Two Creeks are now hard at work constructing the adjoining Point Beach solar farm.

In the annals of Wisconsin electric utility history, Two Creeks represents a noteworthy milestone, as the first solar farm to clear the PSC’s power plant review process and become a valuable addition to the state’s portfolio of power plants. And it took only 18+ months from the crossing of the regulatory finish line for Two Creeks to start sending power into the grid.

Two Creeks can also be viewed as the lead entry in a parade of large solar farms seeking to cross the same regulatory finish line and proceed to construction and completion. Looking out over the next 12 months, the PSC will review and make decisions on six solar farm applications totaling 1,150 MW (see table below).

What we’re seeing here is the emergence of a new resource paradigm that is ushering in a major wave of public works construction across the state. As this transition unfolds, solar power will become widely recognized as a linchpin in the state’s economy, extending through this decade and beyond.