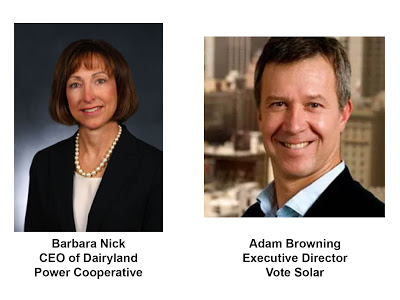 RENEW Wisconsin will host its sixth annual Renewable Energy Policy Summit on Thursday, January 19th, 2017, at Monona Terrace in Madison. The theme of the event, “Clean Energy Goes Mainstream,” will highlight the significant expansion of renewable power underway in Wisconsin, both at the customer and utility level.

– Barbara Nick, CEO of La Crosse-based Dairyland Power Cooperative, which has entered into contracts to supply its member co-ops with renewable electricity from a
large wind power project in Lafayette County and 14 solar arrays across
western Wisconsin. Barb will explain why Dairyland decided to accelerate
its own clean energy transition and how its new sources of solar and
wind energy will benefit its member cooperatives.

– Adam Browning, Executive Director of Vote Solar, which is working to make solar power the go-to energy resource in all 50 states. As the afternoon keynote, Adam will highlight solar’s dramatic expansion in recent years, including its impact on the national economy and on local economies throughout the United States. He will also discuss the critical role that state policy will play in maintaining solar’s momentum.

Ms. Nick will kick off the summit program with her keynote address, followed by a panel session discussing the driving forces behind the clean energy transition and its broadening appeal among homeowners, businesses, and policymakers.

After lunch, RENEW will recognize the most noteworthy clean energy installations launched or energized this year in Wisconsin, as well as the individuals, organizations, and communities that made them happen.

Adam Browning will launch the afternoon program with his keynote, followed by an industry panel session examining the factors propelling the clean energy expansion, and identifying the mix of policies and practices for sustaining that expansion.

The program will feature networking opportunities with exhibitors and attendees, as well as a social hour following the close of the formal program.

RENEW Wisconsin’s Executive Director Tyler Huebner says, “We chose this year’s theme to highlight the acceleration of clean energy across corporate America, utilities, and everyday homeowners.  Solar energy is poised to continue its growth in Wisconsin, while wind power and biogas appear on the verge of making comebacks.  All these resources are cost-effective today, and can provide significant value to Wisconsin if deployed more aggressively.”

Summit registration is open and over 150 individuals have already signed up.  Rates are $120 for Members of RENEW Wisconsin, $150 for non-members, $90 for government and non-profit employees, and $35 for students. Membership with RENEW starts at $35 for individuals and $200 for businesses and organizations.

For more information on the 2017 program agenda, speakers, and registration, please visit our website.

An impressive list of corporate and organizational sponsors has already signed on to support the event, which are showcased on the final page.