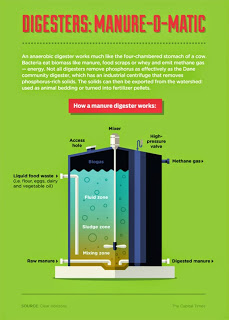 It is no secret that cows produce two things in abundance in the Dairy State: milk and manure.

Wisconsin’s 1.27 million dairy cows produce 3.2 billion gallons of milk and enough manure to fill almost 3,000 Olympic-size swimming pools a year, according to Steve Carpenter, director of UW-Madison’s Center for Limnology, who has studied the water quality of Madison’s lakes for 40 years.

“The automation, the technologies that farmers use today have made them very successful,” said Monte Lamer, a farm boy from Tomahawk and former power plant operator in Alaska who is now plant manager for the Clear Horizons community digester outside of Waunakee.

“At the same time, their success is showing up in our waterways.”