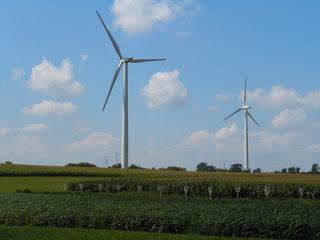 Last week WPPI Energy announced it will purchase the output
from a large 132 megawatt wind project in Illinois.  With this planned addition of a new source of
wind energy to its generation portfolio, WPPI Energy will strengthen its
position as a low-cost provider of clean energy to its 51 member municipal
utilities, 41 of which are located in Wisconsin.
Along with its previously
announced solar addition in Manitowoc County, WPPI Energy will be
providing over 20% renewable energy to its customers when these projects are
completed.
RENEW Wisconsin’s Executive Director Tyler Huebner released
the following statement:

“We commend WPPI Energy for partnering with Invenergy to
expand its supplies of clean, affordable wind energy.  Wind energy is the lowest-cost way to produce
wholesale power here in the Midwest.  We
encourage other Wisconsin electricity providers to follow WPPI Energy’s example
of adding wind and solar to their generation mix.”

Situated in Henry County southeast of Rock Island, Illinois, the new wind project
will supply WPPI Energy with about 450 million kilowatt-hours of electricity a
year when it is placed in service next year. The 66-turbine, 132-megawatt
project will be owned by Invenergy, a Chicago-based wind developer, which also
owns the 86-turbine, 129-megawatt Forward Energy Center south of Fond du Lac.

The companies’ press release can be found at:  https://wppienergy.org/News/NewsItem?item=50.