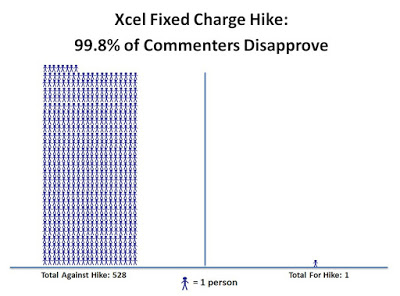 The final tally is in, and it is clear that Xcel Energy’s Wisconsin affiliate, based in Eau Claire, has proposed an incredibly unpopular change in how it wishes to bill customers going forward.

Following the footsteps of other Wisconsin utilities, Xcel’s Wisconsin utility has proposed to raise its monthly “fixed charge,” which every residential and small business
customer pays before using any electricity at all, from $8 to $18 per
month. 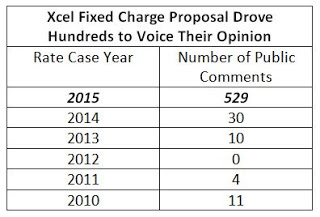 In total, 529 public comments were filed, a seventeen-fold increase in public participation over any Xcel rate case in the previous five years. RENEW Wisconsin’s review shows that 528 (all but one commenter) disapproved of Xcel’s proposed hike in fixed charges.

Public comments were made through the Public Service Commission’s online system, in person at the public hearing on September 16th in Menomonie, or through written mail.

In the public comments, a wide variety of concerns were aired.  Senior citizens, fixed-income, and low-income advocates worry that they will have to choose between paying for electricity, food, or medicine. Energy conservation and renewable energy advocates oppose paying high unavoidable fees while seeing the variable energy rate decrease, making the payback longer than it should be for energy- and money-saving investments.

These perspectives can be seen from the selection of public comments included below:

“I am a senior and living on a rigidly fixed income and will not be able to survive in my home if utility costs continue to inflate.” — Cynthia Martinson, Washburn WI

“While the rest of the Country is moving forward, promoting clean energy, Wisconsin utilities are moving us backwards with proposals that undermine clean energy and energy efficiency. If approved, Xcel’s mandatory fixed charge would increase to $18 per month, up from $8 today–a 125% increase, and Xcel’s Wisconsin customers would be facing much higher bills than their neighbors in Minnesota.” — League of Women Voters of Ashland & Bayfield Counties

“I find it outrageous that in every bill from Xcel there is an insert with information on how to reduce my electricity use so that I can “save” money but at the same time, the mandatory fixed charge will be increased–probably to make up for any money Xcel loses by my conservation efforts.” –Judy Blackstone, Eau Claire

“As an Xcel Energy shareholder, I urge the Public Service Commission NOT to approve the proposed 125% mandatory fixed charge rate increase. This steep, unfair and unnecessary increase will be too much to bear for the poorest and most vulnerable among us; those with low incomes and the elderly.” -Dan Stickler, Eau Claire

“The fixed charge increase XCEL is asking for is unwarranted, totally against the utilities’ best interests, [and] extremely unfair to the public.”– William E. Bastian, La Crosse

“Currently 41% of all student enrolled in our schools are using free or reduced lunch. Some schools, like Longfellow Elementary, are as high as 74%. These are the people who are going to be hit the most by any increase in rates. Keep in mind, these are just household using the assistance, it doesn`t count households living with financial difficulty who choose, for whatever reason, not to take the assistance.” -Chue Xiong, Eau Claire School Board Commissioner.

Previous RENEW Wisconsin analysis also shows that Wisconsin is an outlier on this issue:  no other state has approved such dramatic hikes in monthly fixed charges.  Learn more at http://www.renewwisconsin-blog.org/2015/10/robin-hood-in-reverse-is-back-wps.html.