RENEW Wisconsin Electric Vehicle Blog: Electric Cars are Better for the Environment (Yes, Even in Wisconsin) 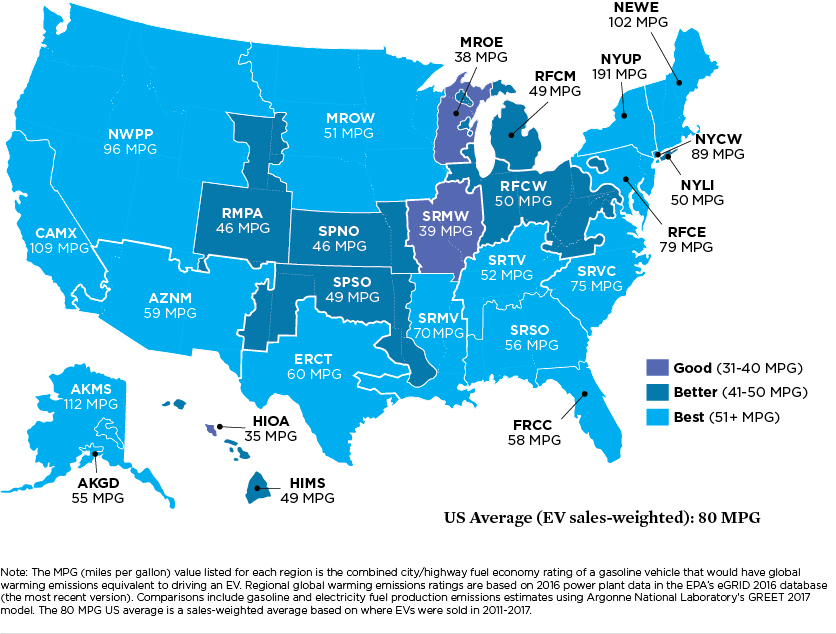 One of the most common questions people ask me is, “Are electric cars really better for the environment?” The resounding answer is, “Yes!”

The logic behind the question is sound; if cars run on electricity, and electricity is made with coal, then electric cars are powered by coal. And is coal really better than gasoline?

Well, yes and no. Ideally, our electricity wouldn’t be made from fossil fuels. But, even so, driving electric produces fewer emissions than driving a gasoline car.

No Matter Where you Drive, Electric Cars Produce Fewer Emissions

Union of Concerned Scientists spent years answering this question. Their scientists added up the total emissions from conventional cars and from electric cars. They found that electric cars produce half the emissions of the average gasoline car.

Their findings show that across the country electric vehicles produce the emissions-equivalent of an 80-mpg car. Even in Wisconsin, where the majority of our electricity comes from coal, electric vehicles are far cleaner than the average gasoline car even considering the emissions produced during the manufacturing of the car.

Producing any kind of vehicle takes an abundance of resources and energy. Since electric cars have large batteries they take even more energy to produce.  In fact, the manufacturing emissions could be over 60% higher than a gas-powered car. However, as soon as the cars start to be driven the emissions decrease significantly.

Electric cars convert more energy into forward movement than gasoline cars. Over 60% of the energy that goes into an electric car gets converted into miles traveled. A gasoline car only uses 20% of the energy from gasoline for miles traveled. This means it takes way more energy to power a gasoline engine than an electric one. So, even if both cars are using fossil fuels, the electric car will use less total energy and produce fewer emissions per mile driven.

Gasoline cars have tailpipes that emit harmful pollution. Electric cars don’t have a tailpipe, and don’t generate emissions while driving.

This has air quality implications. With a lot of cars operating in close proximity, urban areas and the areas around highways tend to have higher concentrations of air pollution. Since electric cars don’t contribute to pollution in cities and on highways, they can do a lot to help improve air quality.

So, while an electric car takes more energy to produce, it consumes way less energy during its life. If you care about the emissions of your vehicle, it’s time to ditch the gasmobile.

There are an abundance of other reasons to switch to driving electric, so keep in touch to find out more!