Smaller Solar Farms in Wisconsin – Why More Are Needed 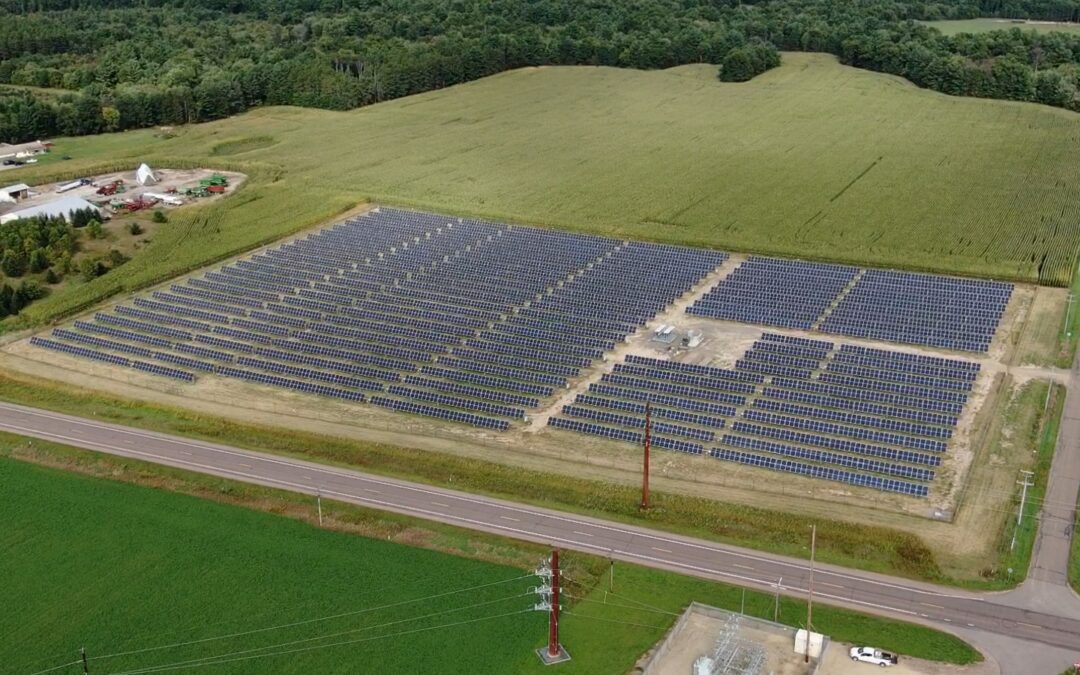 For decades, utility investments in power plants and transmission lines have been predicated on the concept of economies of scale. The theory behind it is beguilingly simple: the larger the installation sought by an electric utility, the lower the unit cost of the investment, which utility planners and regulators regard as a measure of economic efficiency. When loads are growing, the “bigger is better” paradigm is often an economically rational fit for electric utilities seeking to recover large-scale capital investments in fossil generation over the broadest possible cohort of current and future customers.

But solar power, the default resource option for electric providers today, is a somewhat different animal due to its scalability. Yes, economies of scale can certainly reduce the unit price of solar generating capacity, but other on-the-ground factors can influence the economics of this resource. These factors include but are not limited to the cost of acquiring site control of the host properties and obtaining all the necessary approvals to construct the project. Interconnection costs can be high as well, especially for larger projects requiring additional land and approvals to supply power to the grid.

These thoughts came to mind after visiting two smaller solar farms that started producing power this year. The first project, called Strobus Solar, was developed by OneEnergy Renewables and serves Jackson Electric Cooperative. The second installation, O’Brien Solar Fields, was one of the stops in this September’s Ride with RENEW bicycle tour. Developed by EDF Renewables and owned by Madison Gas and Electric (MGE), this 20 MW solar farm in Fitchburg supplies electricity to seven MGE customers under long-term contracts. 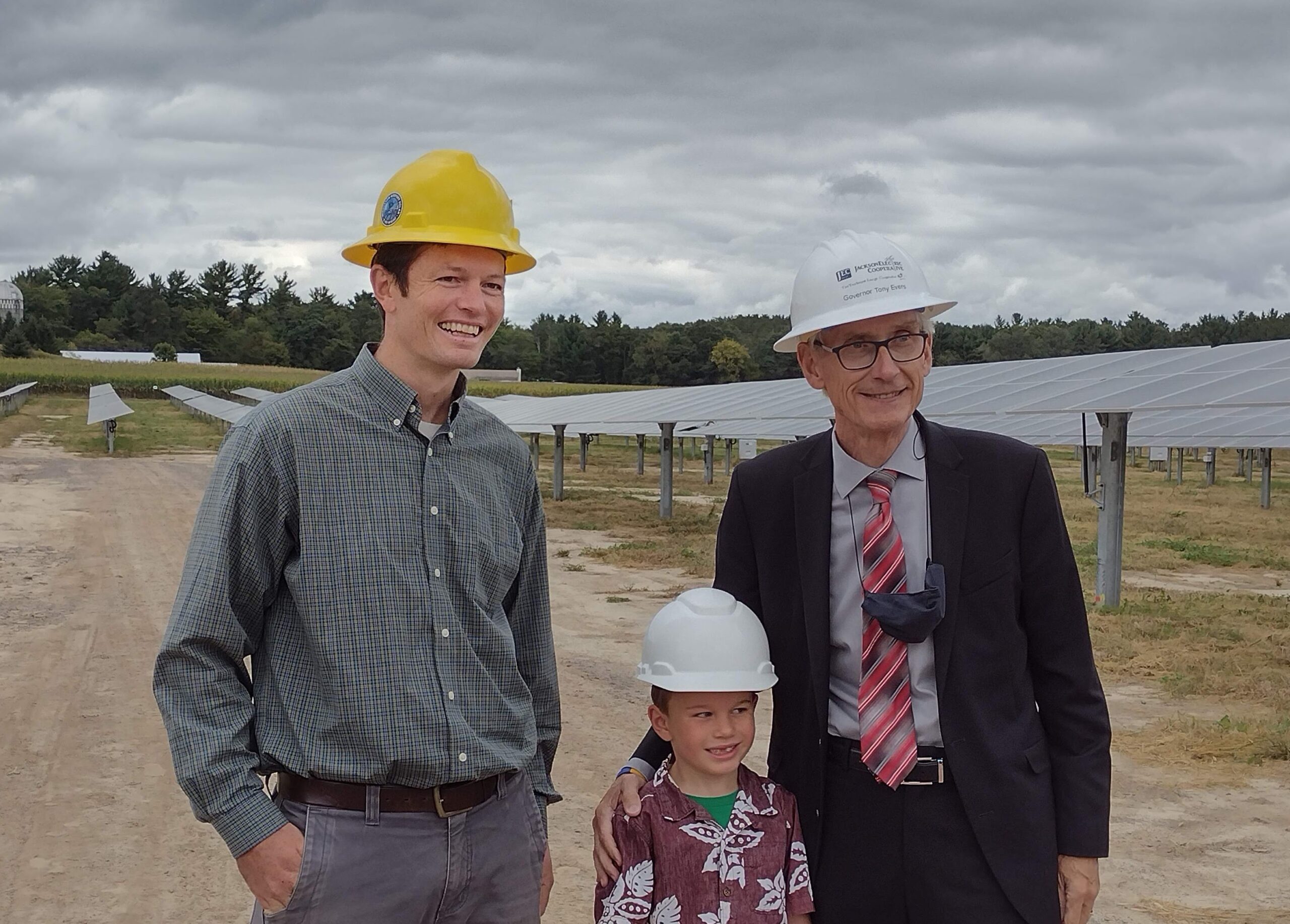 Governor Evers and the Project Developer, Eric Udelhofen, from OneEnergy Renewables at the Ribbon Cutting Ceremony for the Strobus Solar project.

Occupying a mere 12 acres, Strobus Solar is located about six miles north of Black River Falls and is tucked into a compact parcel framed by evergreen trees and U.S. Highway 12.  On a cloudy September day, more than 50 people attended a ribbon-cutting ceremony for the Strobus project, one of eight solar farms in southeast Minnesota and west-central Wisconsin that make up OneEnergy’s Mastodon Solar portfolio. With a combined 17 megawatts (MW) of AC-rated capacity, all eight Mastodon solar farms are located in the territory served by rural electric cooperatives.

As noted on OneEnergy’s website, “the electricity generated by each project will be purchased by the local participating electric cooperative, resulting in savings on energy supply and increased resiliency. These savings will be passed onto the cooperative’s members. The available Renewable Energy Credits will then be sold separately to visionary buyers committed to ensuring their renewable energy procurement dollars are devoted to new projects that serve local communities.”

Of the four Mastodon projects located in Wisconsin, Strobus is the second to be energized this year, following Blue Prairie, a 2.5 MW installation southwest of Black River Falls. The other two, Stromland and Shamrock, should be operating before the end of this year. Plymouth-based Arch Electric is the general contractor for all four Wisconsin projects.

Governor Evers spoke at the ribbon-cutting ceremony, along with representatives of Jackson Electric Cooperative, Arch Electric, and Northern Family Farms, the participating landowner. Based in nearby Merillan, Northern is Wisconsin’s largest Christmas tree grower, operating on more than 7,000 acres. After the prepared remarks, OneEnergy and Arch opened the gates to let Governor Evers and other guests circulate through the project and ask questions.

On one corner of the Strobus parcel is the substation that feeds the solar-generated electricity directly into the wires overhead. Though the equipment onsite is brand-new, low-growing grassy vegetation has already been established, covering the entire project footprint. After three years, the mix of deep-rooted, primarily native plants will provide a healthy habitat for birds, insects, and other species. At nearby Blue Prairie, sheep are already grazing around and under the 7,000 panels installed there.

Strobus is expected to generate about 3,000 megawatt-hours of electricity a year. But the Renewable Energy Credits associated with that output will not flow to Jackson Electric. They will instead be sold to Native, a Public Benefits Corporation, through its New Renewables Portfolio.

According to Native’s website, the purpose of the Portfolio “is to enable Renewable Energy Credit (REC) buyers to play a causal role in actualizing new renewable energy projects. Native has committed to a 10-year renewables purchase agreement with Strobus, LLC on behalf of Portfolio investors. Without this type of long-term REC purchasing agreement, this project would not be economically viable.”

O’Brien Solar Fields in the city of Fitchburg, Wisconsin.

Occupying 130 acres along the edge of urban Fitchburg, O’Brien Solar Fields is as large as a distributed solar project gets. However, while every kilowatt-hour produced at O’Brien flows directly into Madison Gas and Electric’s distribution grid, only seven customers see the impact of this project on their utility bills. Those customers are the State of Wisconsin, University of Wisconsin-Madison, City of Fitchburg, Promega, Placon, Tribe 9 Foods, and Willy St. Co-op.

Energized this summer, O’Brien Solar is the newest Renewable Energy Rider (RER) project serving MGE customers. Several years ago, MGE received approval from the Public Service Commission (PSC) to build solar farms to serve individual customers, including those with multiple facilities, through its RER program. Unique to MGE, this service allows customers to be served by one larger solar farm instead of building numerous solar systems to supply each of their facilities.

A voluntary program, MGE’s RER program does not affect base electric rates. Participating customers fully absorb the cost of MGE’s investment in the solar arrays, and these costs are spread over 30 years. The electricity generated at O’Brien offsets grid power that would otherwise flow to these customers at specified prices throughout the contract term. Should standard electric rates rise faster than the agreed-upon pricing for O’Brien’s electricity, the savings will flow directly to the participating customers.

This unique model combines elements of both behind-the-meter generation and community solar power. But in order to entice customers to access brand-new yet low-cost sources of power, the project owner must design and develop projects that are competitive with the utility’s own avoided cost of power.

The question arises, what did MGE do to keep O’Brien’s development costs in line with its investments in larger solar projects and make it an affordable option for customers?

First, the project occupies only one parcel of land, the former Stoner Prairie Dairy owned and operated by the O’Brien brothers over several generations. Though the parcel is adjacent to a rapidly growing neighborhood, the project’s configuration allows the O’Brien family to maintain its most profitable farming operations as well as live in their long-time residence. Negotiating with only one landowner gives a developer more room in tailoring the project to avoid potentially expensive workarounds.

Second, from an electrical perspective, the project is divided into three zones, each with a separate interconnection to MGE’s feeder lines. By spreading out the project’s output in this fashion, MGE could forgo the more significant expense of running a large tie-in line to the closest substation.

Third, much like a 30-year residential mortgage, the RER contract is a powerful tool for breaking down a significant capital outlay into a manageable expense for the customer. Just as utilities rely on extended depreciation schedules to help them digest the costs of building central station power plants, the RER service provides a similar benefit to participating customers.

In the end, the all-in cost of O’Brien Solar Fields amounted to $29.5 million, which, on a unit basis, comes to $1,475 per kilowatt (kW). To put that number in perspective, the unit price of six larger solar farms totaling 414 MW that Alliant Energy proposes to acquire is $1,449 per kW. In fact, O’Brien’s unit cost is within 10% of the estimated cost of acquiring a 20 MW share of a project ten times as large.

Moreover, it took only three years for EDF Renewables, O’Brien’s original developer, and MGE to advance this power plant from the concept stage to fruition, a relatively speedy turnaround compared with larger solar installations.

Indeed, small solar farms can deliver affordable electricity at a reasonable price by avoiding the increased complexities and additional permitting hurdles associated with larger solar farms that tie into the transmission system. Moreover, while larger solar farms make a great deal of sense in areas rich in transmission infrastructure, relying solely on those locations would exclude much of Wisconsin from being able to host solar power.

There are many parcels of land throughout Wisconsin that have the requisite attributes for hosting projects on the scale of Strobus and O’Brien. In addition, projects of that size are ideal vehicles for community solar offerings, designed to deliver zero-carbon electricity to subscribing customers who cannot access solar power at their residence or business.

Over time, with increases in system power costs looking very likely, the state should explore and adopt policies to promote smaller solar farms within its boundaries. As exemplified by the Strobus and O’Brien projects, development on that scale can yield faster results at comparable costs while potentially providing a reliable revenue stream to the many thousands of landowners who don’t live near high-capacity transmission lines and substations.

Wisconsin is in the beginning stages of an energy revolution. With a more forward-looking policy framework, Wisconsin could emerge as a national leader in solar power. Embracing distribution-level solar solutions now will help more Wisconsinites participate in the benefits of these projects and give every city, town, and village a solar project to call their own. Wisconsin’s population is distributed throughout the state–our renewable energy portfolio should be as well.