Solar and Agricultural Land Use

Over the past few weeks we have seen some exciting approvals of major solar farms in Wisconsin. The Badger Hollow, Two Creeks, and Richland County solar projects would combine to be 500 megawatts (MW) of solar power capacity, enough to supply about 130,000 homes’ average electricity usage each year in Wisconsin. Once completed, the 500 MW of solar photovoltaic (PV) will increase the state’s solar capacity five-fold. But a concern has been raised about how much land these projects will use, and the implications of future solar farms on Wisconsin cropland.

To learn more about these issues, we have analyzed the intersections of utility-scale solar PV and conventional agriculture and found a number of interesting points centered on the change in crop production and harvested land in Wisconsin.

Our first analysis looks at the change in total harvested cropland from 1982 to 2017 and links this to the change in the amount of crops actually produced over the same time period. The key finding here is simple: we are growing more crops today than we were 35 years ago and doing so on fewer harvested acres of land.

Taking data from USDA National Agricultural Statistics Service, we analyzed conventional harvested crop groups in Wisconsin between 1982 to 2017. We had some important findings. One, the total amount of land harvested for all crops has decreased by about 9% from 1982 to 2017. In 1982, a little more than 10 million acres of land was harvested exclusively for the production of crops. In 2017, total harvested cropland totaled 9.2 million acres. Figure 1 below shows the change in total harvested land in these 35 years. In short, urban and suburban development, federal farmland preservation programs, improved crop yields, and farm retirements and closures have contributed to this loss of harvested crop land. 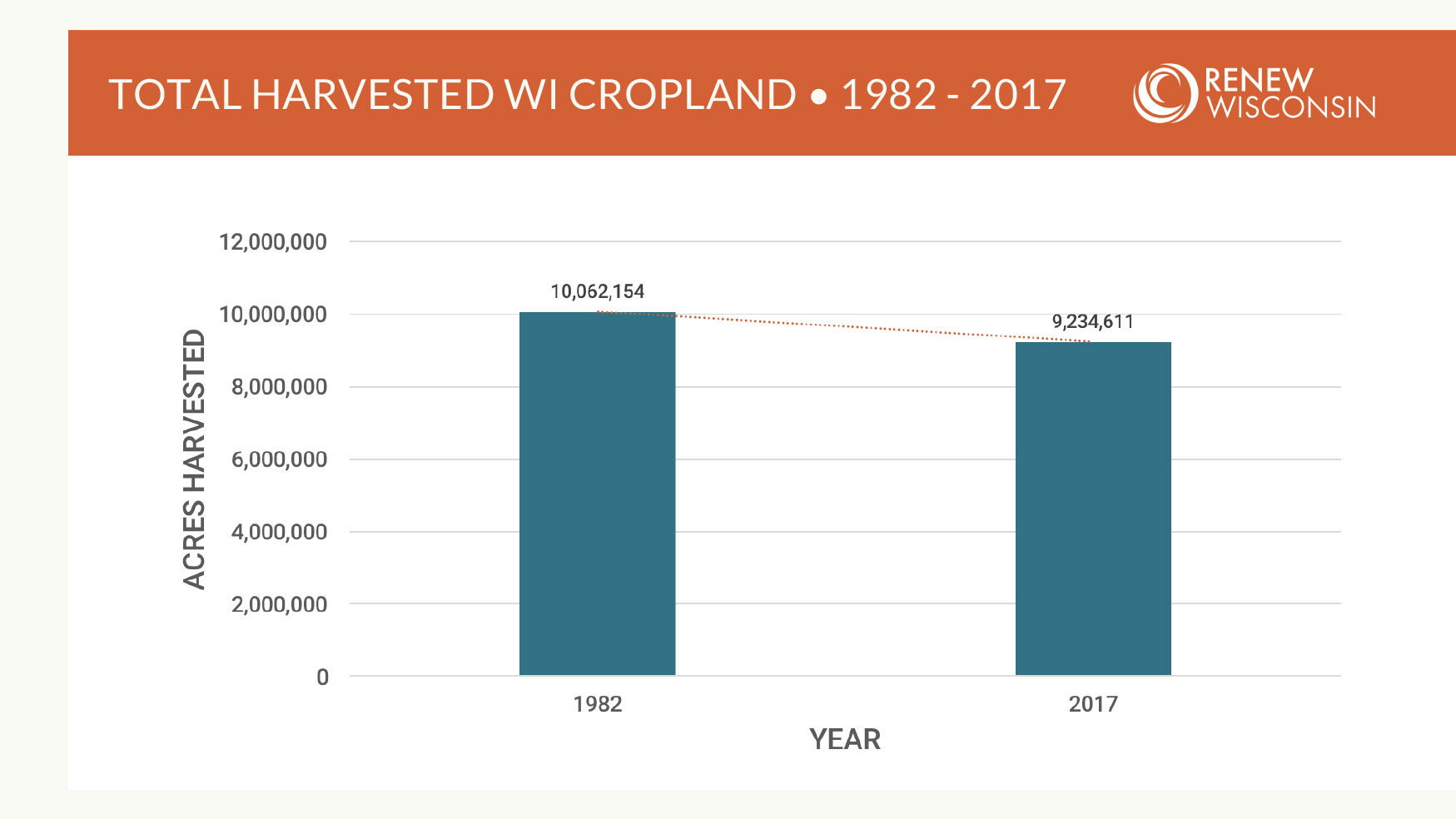 Despite having fewer acres of harvested cropland within the state of Wisconsin, we are growing far more crops today than we were in 1982. In that year, Wisconsin corn (for grain) totaled 322 million bushels. Fast forward to 2017, Wisconsin corn (for grain) totaled nearly 520 million bushels. According to the Wisconsin Corn Growers Association’s website, “grain corn is used as feed for cows, pigs and poultry, as well as in the generation of ethanol, corn oil and corn starch and other non-food products.” Of all the grain corn produced in Wisconsin, about 37% of harvested grain corn goes to ethanol production. 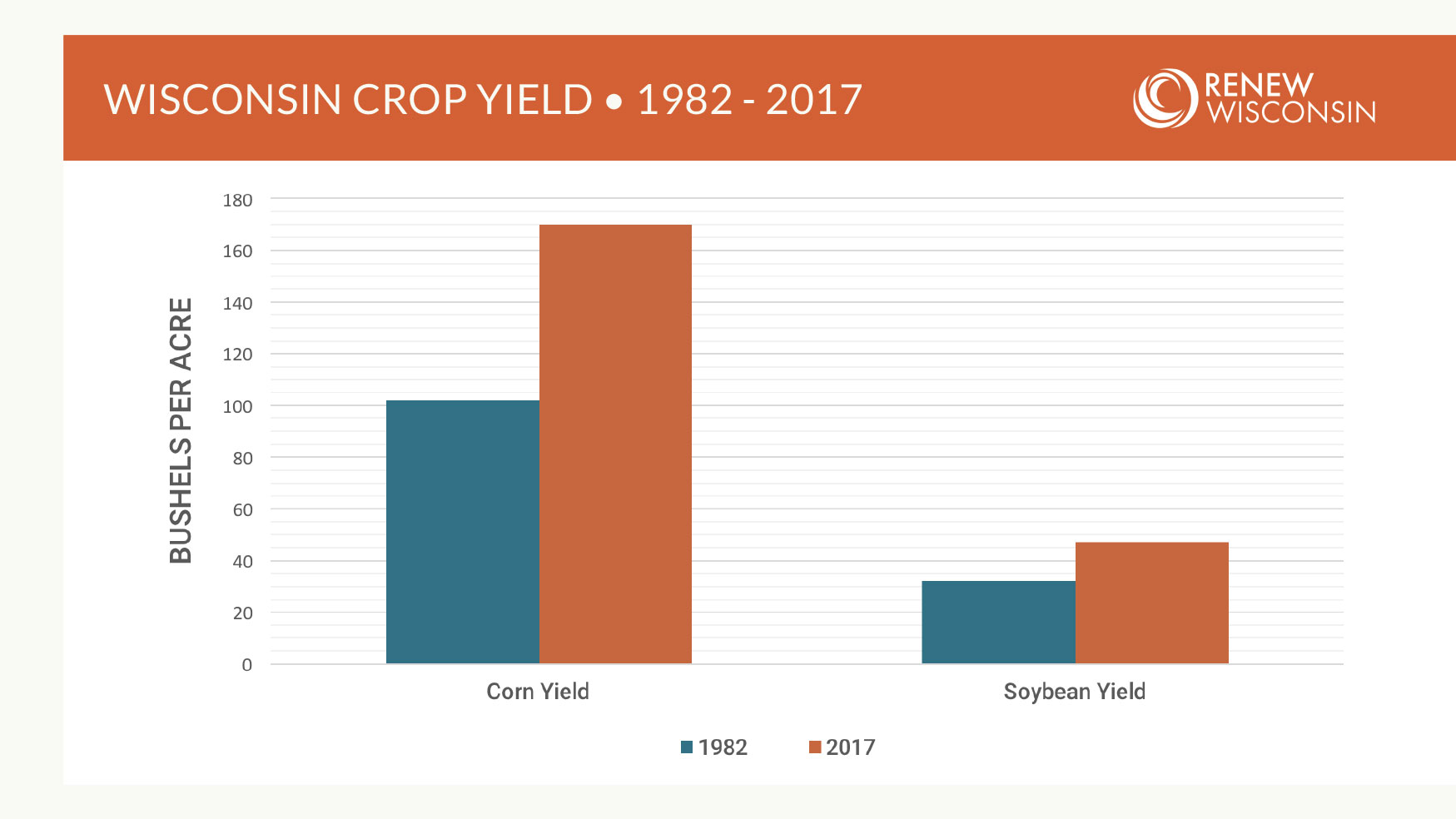 As crop yields are expected to continue increasing and productivity of harvested land is improved, a new set of issues are presented. The depressed commodity prices of corn and soy exist today because yields have gone up considerably, leading to an oversaturated marketplace. The loss of important export markets also acts as a compounding factor upon the current commodity prices of corn and soybeans. These factors have created unfavorable conditions for conventional crop farmers in Wisconsin and throughout the Midwest, and crop producers are looking far and wide for new ways to generate revenue.

Our research turned up another unexpected fact: many farmers today are already in the  energy production business. About 37% of the corn already grown in Wisconsin is used for ethanol, a common form of biofuel. Another way to look at this is that more than one million acres of farmland are allocated each year, on average, for the production of corn for biofuel.

If just 11% of that land was allocated for solar PV, rather than ethanol production, we would generate enough power to supply 50% of our state’s electricity demand exclusively from solar. Incorporating solar onto the farm is simply another form of Wisconsin-made energy that farmers can provide our state.

Not only would the footprint of land to meet 50% of our electricity needs be small relative to other uses, it is a more efficient use of land as well.  One acre of corn produces enough ethanol for an E15 vehicle to travel about 11,000 miles over the course of a year. One acre of solar PV provides enough energy equivalent to power 715,000 miles worth of battery electric vehicle travel.

It is also worth keeping in mind that federal taxpayers are already paying to take cropland out of production through the U.S. Conservation Reserve Program. Today in Wisconsin, nearly 100,000 acres are not being farmed in order to preserve the land, but also to reduce the total amount of crops produced in order to manage oversupply. 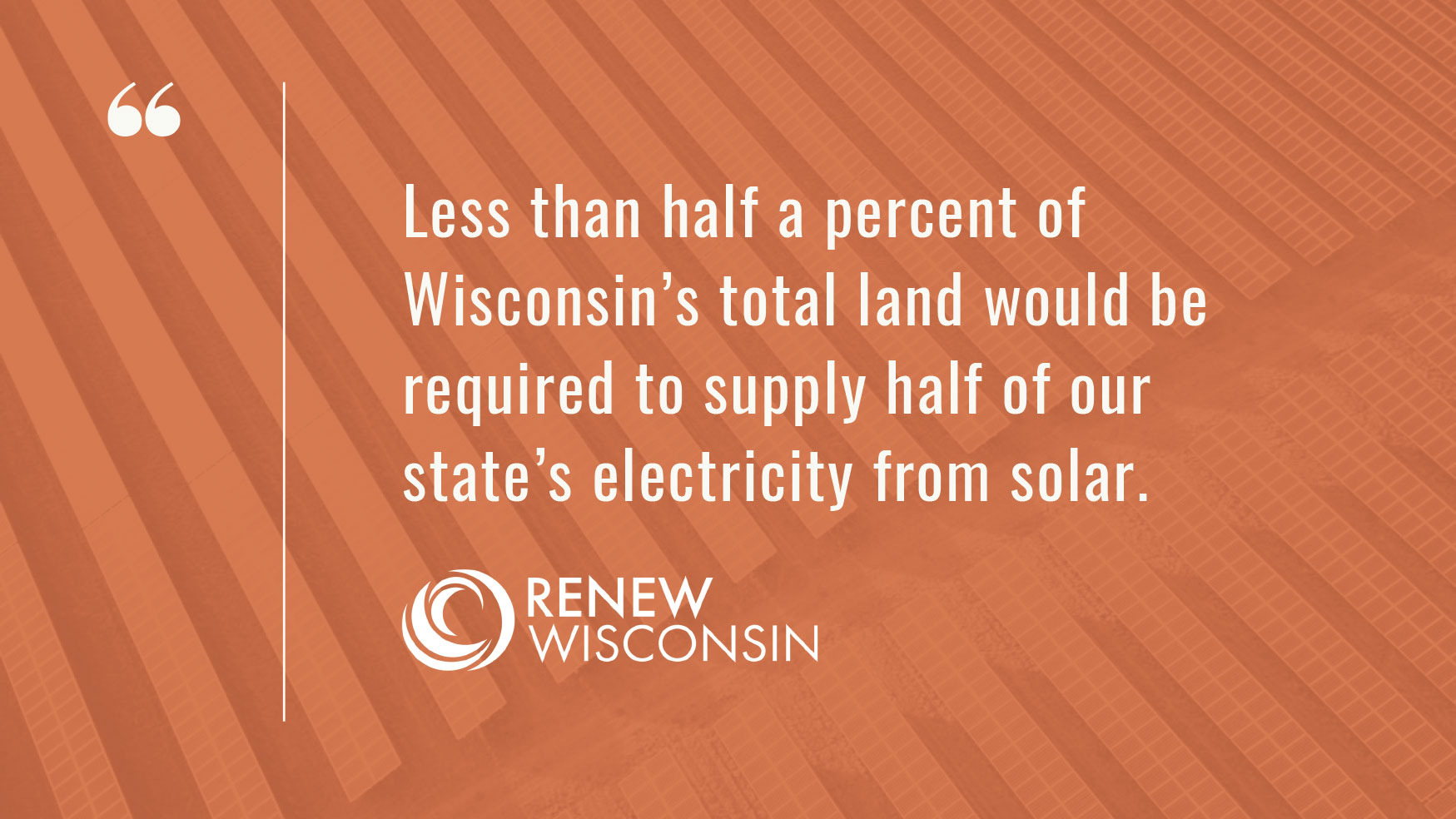 So How Much Land Would Solar Use in Wisconsin?

The current circumstances of conventional crop farming in Wisconsin has created favorable conditions for a new brand of farming; solar farming. In 2017, Wisconsin electricity sales totaled about 69 million megawatt-hours. In order to offset 50% of Wisconsin’s electricity demand, about 120,000 acres of land would be used to produce electricity from utility-scale solar PV. Assuming a land footprint of seven acres per megawatt (based on Invenergy’s Badger Hollow Solar project), Wisconsin would have about 17,100 MW of utility-scale solar deployed across the state generating clean, Wisconsin-made electricity. 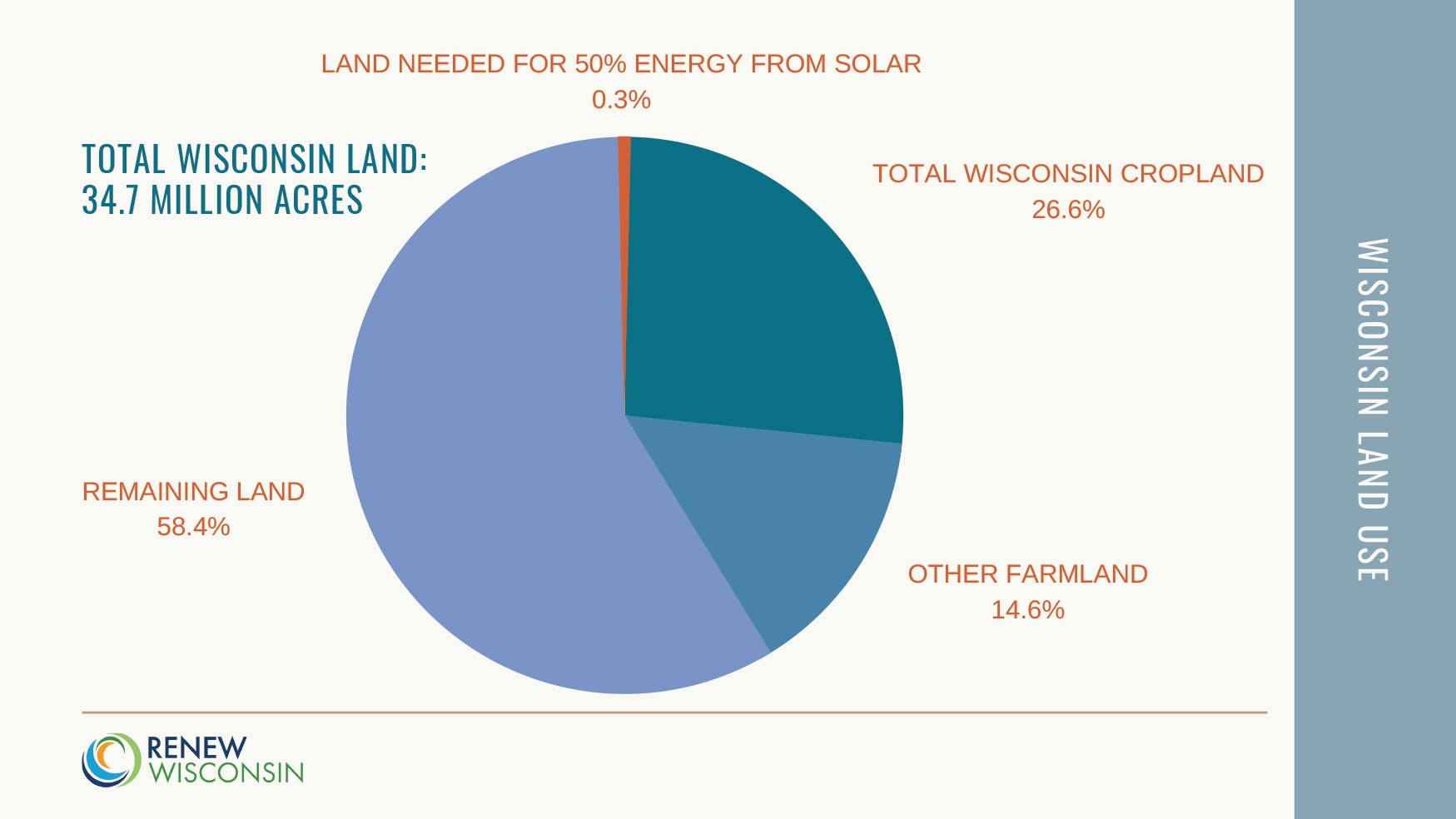 How much land does solar use compared to coal?

The last component of our analysis looked at the physical footprint of imported coal relative to solar PV. As of 2017, Wisconsin imported nearly 22 million short tons of coal, accounting for about 50% of the state’s energy mix. While we don’t see the extraction of this coal from Wyoming coal fields, the amount of coal mined from the earth to power our state is substantial.

If we assume that we’re mining coal six feet deep, then we would have to mine about 135,000 acres of coal over a 40-year period in order to produce 50% of Wisconsin electricity from coal we are using. A solar farm is estimated to last 40 years, so we must compare 40 years of operation and coal mined in order to see the apples-to-apples comparison of land use.

Thus, although the footprint of a coal plant in Wisconsin is smaller than solar farms, those coal plants have a very similar total land impact because of how much coal has to be mined to fuel them!

While the thought experiment of replacing coal storage with solar fields is not one-to-one, this point gives particular attention to the true physical footprint of our energy consumption. It is also important to keep in mind that this analysis does not include additional land used for the transportation of 22 million short tons of coal or land dedicated to coal ash disposal. Each year we send hundreds of millions of dollars out of our state to purchase and import the coal and natural gas needed to power the various coal-fired and natural gas power plants throughout Wisconsin. With Wisconsin-produced electricity from solar we are leaving carbon in the earth, keeping dollars in the state, and creating well-paying jobs. 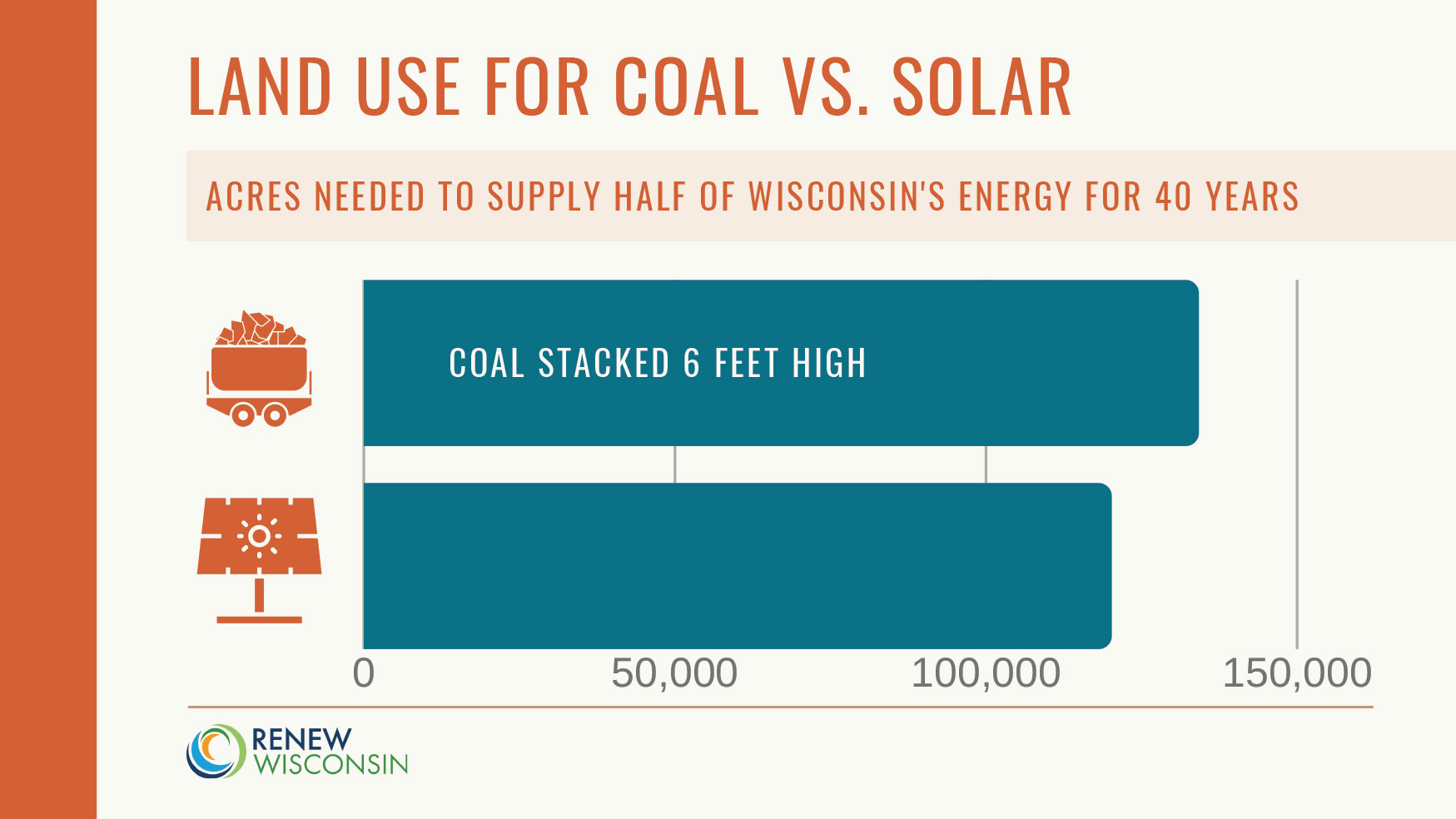 Wisconsin farmers have played a crucial role in providing food and energy to our communities for decades. Farmers now have a new opportunity to provide clean, renewable energy to the people of Wisconsin today and well into the future. Trends in conventional crop production have fostered ripe conditions for farmers to implement new ways to generate revenue. Crop yields are up, we are growing far more crops on less land, and commodity prices are low due to market conditions largely beyond farmers’ control.

With solar farms, we’ll be far more energy independent, and millions of dollars will be pumped into our rural communities. Solar-hosting farmers will have a new, reliable source of revenue for years to come.