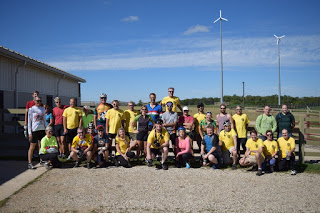 The total tour time will be approximately 6 hours (including stops at renewable energy sites) and actual riding time will be 2 to 3 hours. Seasoned cyclists will have an optional longer route of about 40 miles to travel at their own pace.

Participants will get an inside look at some of the area’s leading renewable energy projects and will enjoy breakfast, lunch, and beverages along the way. They will visit with installers and workers who are advancing renewable energy every day, and hear from customers about why clean energy works for their pocketbooks and their businesses.

The stops and start and end schedule is as follows:

The ride will conclude at Capital Brewery, also powered by a set of solar panels, for refreshments around 4:00 p.m.

Registration for the ride is open through September 29th. The cost is $30 for members of RENEW Wisconsin, $40 for non-members, and $60 to both register for the ride and become a member of the organization for one year.  All donations to RENEW Wisconsin for this charity bike ride are matched up to $15,000 by generous donors John & Mary Frantz of Madison!

Individuals and businesses can donate to RENEW Wisconsin or in support of a rider,  sign on as an event sponsor, or volunteer on ride day.

“We are very excited to tour some of the Middleton area’s great renewable energy projects on Sunday, October 1st,” said Tyler Huebner, Executive Director of RENEW Wisconsin.  “This tour allows us to showcase a variety of ways to produce homegrown, clean energy right here in Wisconsin including wind, solar, and even cow manure. This is a really fun event where you can meet great people, help a good cause, and learn together about clean energy in Wisconsin.” 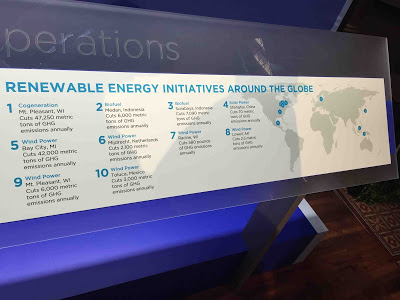 On May 14th, Racine, WI-based SC Johnson was honored by the World
Environment Center as the recipient of the 2015 Gold Medal for International
Corporate Achievement in Sustainable Development.

This is a major award amongst large multi-national
companies, and only one company is recognized each year.  SC Johnson became the second company to win
the award twice, after first receiving the award in 1994. Recipients from
recent years include Volkswagon Group, Unilever, IBM, and Wal-Mart Stores.

With financial support from SC Johnson, I attended the event
in Washington, DC to help honor the company.
RENEW’s relationship with SC Johnson started about four years ago, when our
Program and Policy Director Michael Vickerman advised the company as it was
pursuing the installation of two wind turbines to help power Waxdale, one of
its major factories in Mt. Pleasant, Wisconsin, near Racine.

Fisk Johnson, the 5th generation CEO of the family-owned
company, was on hand to receive the award.
“Reaching for that ideal of trust and goodwill is what motivates us at
SC Johnson, and it’s where we find our best answers and greatest
successes.  This recognition today, which
I accept with great pride on behalf of all of the people in our company,
inspires us on even more.”

U.S. Representative Paul Ryan presented the award to Fisk
Johnson, and he highlighted their investment in renewable energy resources
including landfill gas and wind turbines. Ryan said, “If you drive by Waxdale,
you see a capped landfill with the methane running into the generators, along
with the two windmills, making sure that they are purely 100% sustainable for
their factory producing these wonderful products.  That just shows you how committed this family
is, and this company is, to this mission.
It’s really impressive.”
To view (most of) Paul Ryan’s remarks, check out this video:

According to SC
Johnson, Waxdale produces an average of 100 percent of its electrical energy
onsite each year.  Glade®,
Windex®, Pledge®, Scrubbing Bubbles®, Shout®, Raid® and OFF!®
are all among the trusted household products made at Waxdale. 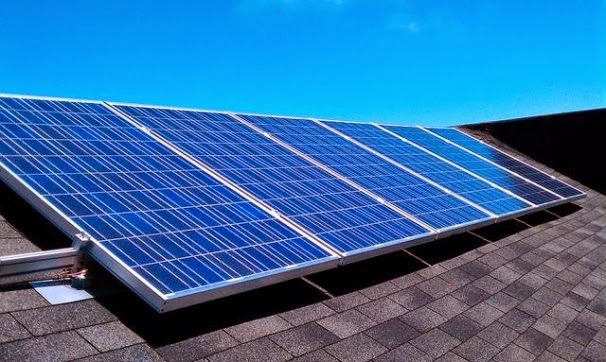 In
the study released yesterday, Berkeley
Lab analyzed more than 50,000 home sales near 67 wind
facilities in 27 counties
across nine U.S. states.  In
summary, the
research did not find any statistically identifiable impacts
of wind facilities
to nearby home property values. Read the full 2013 report, the previously published 2009 report, and yesterday’s press release below for more information.

Immediate release — Lawrence
Berkeley National Laboratory (Berkeley Lab) analyzed more than
50,000 home
sales near 67 wind facilities in 27 counties across nine U.S.
states, yet was
unable to uncover any impacts to nearby home property values.
“This
is the second of two major studies we have conducted on this
topic [the first
was published in 2009 –
see below], and
in both studies [using two different datasets] we find no
statistical evidence
that operating wind turbines have had any measureable impact on
home sales
prices,” says Ben Hoen, the lead author of the new report.
Hoen
is a researcher in the Environmental Energy Technologies
Division of Berkeley
Lab.
The
new study used a number of sophisticated techniques to control
for other
potential impacts on home prices, including collecting data that
spanned well
before the wind facilities’ development was announced to after
they were
constructed and operating. This allowed the researchers to
control for any
pre-existing differences in home sales prices across their
sample and any
changes that occurred due to the housing bubble.
This
study, the most comprehensive to-date, builds on both the
previous Berkeley Lab
study as well a number of other academic and published U.S.
studies, which also
generally find no measureable impacts near operating turbines.
“Although
there have been claims of significant property value impacts
near operating wind
turbines that regularly surface in the press or in local
communities, strong evidence
to support those claims has failed to materialize in all of the
major U.S.
studies conducted thus far”, says Hoen.
“Moreover, our findings comport with the large set of
studies that have
investigated other potentially similar disamenities, such as
high voltage
transmission lines, land fills, and noisy roads, which suggest
that widespread impacts
from wind turbines would be either relatively small or
non-existent.”
The
report was authored by Ben Hoen (Berkeley Lab), Jason P. Brown
(formerly USDA
now Federal Reserve Bank of Kansas City), Thomas Jackson (Texas
A & M and
Real Property Analytics), Ryan Wiser (Berkeley Lab), Mark Thayer
(San Diego State University)
and Peter Cappers (Berkeley Lab). The research was supported by
the U.S.
Department of Energy’s Office of Energy Efficiency and Renewable
Energy.

Lawrence
Berkeley National Laboratory addresses the world’s most urgent
scientific
challenges by advancing sustainable energy, protecting human
health, creating
new materials, and revealing the origin and fate of the
universe. Founded in
1931, Berkeley Lab’s scientific expertise has been recognized
with 13 Nobel
prizes. The University of California manages Berkeley Lab for
the U.S.
Department of Energy’s Office of Science. For more, visit www.lbl.gov.

The nocebo effect, and why it’s much more dangerous than wind turbines

David Perry’s article for the Renew Economy blog addresses health concerns surrounding the infrasound produced by wind turbines and concludes that they are just another unfounded claim by antiwind energy campaigners.True, wind turbines produce infrasound, but at levels far below what is necessary to cause harm. In countering these unfounded assertions, Perry relies on research by Prof. Geoff Leventhal on infrasound effects and finds that self reported health impacts are nothing more than textbook examples of the nocebo effect: If you believe something bad is going to happen, then chances are your brain will make it happen.

Anti-wind
energy activists have shifted the goal posts over the years, with
aesthetic, birdlife, carbon abatement and even economic issues getting a
run. But by far the most cutting attack has been around noise, and the
supposed health impacts that result.

There is no question that wind turbines create sound, and
that in some circumstances this sound can be heard at nearby residences.
Rigorous noise standards are designed to give a reasonable level of
protection against sleep disturbance, taking into account the location
of turbines, the model, and existing background noise. This approach is
not unusual, and similar standards are applied to a range of man-made
noise sources, from pubs to freeways.

While this is good enough for most people, some still find
the residual noise levels annoying. At this point, noise level alone
isn’t a good predictor of annoyance — personality and existing attitudes
tend to dominate. Those residents with a clear view of the turbines
tend to find them more annoying,
while those receiving an economic benefit are more tolerant .
Compounding this, residents with negative-oriented personality traits
tend to perceive turbine noise as being louder.
At the extreme, I’m aware of at least two wind farms where complaints
have been received about excruciating, intolerable levels of noise, only
for the resident to be told that the wind farm was shut down at the
time.

Just because these factors cannot be quantified with a
sound logger does not mean nothing can be done. Community engagement,
face-to-face discussion and education go a long way, as does ensuring a
lasting community benefit. In some cases landscaping or improved sound
insulation can solve the problem. While this undoubtedly affects indoor
sound levels in many cases, it also empowers residents with a sense of
control over the situation, improving their outlook more
generally. Developers are now keenly aware that listening to the local
community and sharing the financial benefits is pivotal in getting a
wind farm built, and keeping neighbors happy.

That should be the end of the story.

Alas, all manner of health issues (216, at last count)
have been attributed to wind farms, even when the wind farm is
completely inaudible, located tens of kilometers away, or, as mentioned,
not even operating. These physics-defying claims are largely a result
of fear mongering around infrasound.