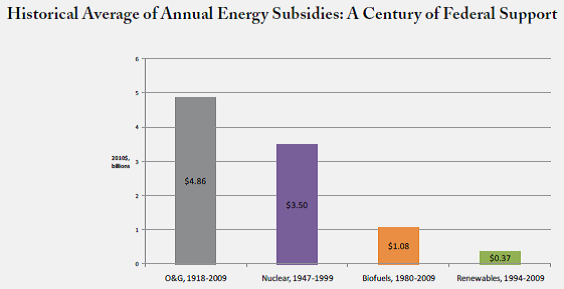 The price of renewable energy continues to decline, while the price of conventional energy (with the recent exception of natural gas) continues to increase.  Customer-sited solar electric is now equal to or less than the retail cost of grid electricity in many areas of Wisconsin.  Dairyland Power Cooperative and Vernon Electric Cooperative will begin purchases of power from two large solar arrays under long term contracts. Biogas to electricity is competitive or less than retail electricity for farms and solid biomass fuels out compete propane and oil in rural areas.  Renewable fuels have stable, zero, or low fuel costs, that do not fluctuate like fossil fuels.

2. Fossil and nuclear industries have received more subsidies from government than renewables

All energy production in the U.S. receives significant federal support, dating back to the first oil subsidies in early 20thcentury. In cumulative dollar amounts, the oil, coal, gas and nuclear industries have received approximately $630 billion in U.S. government subsidies, while wind, solar, biofuels and other renewable sectors have received a total of roughly $50 billion in government funding.

3. Wisconsin has plenty of solar energy

Wisconsin consistently receives enough solar energy to supply significant amounts of electricity used in Wisconsin households and businesses from their rooftops and properties.  Wisconsin receives 20 percent more solar energy than the world’s leader in solar development, Germany, and similar amounts as New Jersey, a solar energy installation’s leader in the US.  A number of studies imply that solar could supply 100 percent of Wisconsin’s electricity during peak hours by installing panels on existing roofs with solar access (http://www.ecotopia.com/apollo2/photovoltaics/PVMktPotentialCostBreakthruNavigant200409.pdf).

4. Renewable energy provides energy at critical times and locations and is matched well with other resources to maintain reliability

Solar energy output peaks in the summer when demand on the electricity system is highest due to air conditioning use.  Wind power can also match high electrical demands when summer and winter winds bring in heat and cold.   Biomass and hydropower are forms of stored solar energy that can be used to fill in supply gaps from intermittent sources.  Natural gas plants can be quickly started as an adequate and clean back up source of power.  Renewable energy systems can be installed at weak voltage locations in the transmission grid to boast power. Installation of incremental amounts of renewable energy to meet growing local demand can occur in months rather than in the years it takes for fossil fuel plants to be installed.


5. Net metering adds value to the grid and all customers

Net metering uses the electric transmission grid to absorb extra renewable electricity from distributed producers and provides a similar amount of electricity back when electric demand exceeds renewable supply.  Net metering adds value when produced during peak electrical demand hours, reduces the need for transmission and distribution infrastructure, reduces environmental emissions, enhances energy security, and hedges the variable nature of fossil fuels prices.  Although all customers pay for the electrical grid, studies have shown that the extra value from the renewable production is greater than the cost.

Wisconsin has thirteen wind farms varying in size from 1.3 MW to 162 MW with a total of 647 MW.   This represents about half of all wind energy used in Wisconsin, the rest coming from neighbors Iowa and Minnesota.  This power is local, has no emissions, and is now one of, if not the, lowest sources of electricity in Wisconsin and the Midwest (http://www.awea.org/Resources/Content.aspx?ItemNumber=5547).

7. Biogas takes pollution and converts it to rural energy, jobs, and environmental improvements

Wisconsin’s 1.3 million dairy cows produce a great deal of manure: 16 billion gallons per year.  For years this manure was spread on pasture land in the summer and winter.  Unfortunately, some of the nutrients, pathogens, and smell polluted the local water and air sheds.  Wisconsin’s 40-50 farm and food bio digesters take manure and high organic content food wastes and convert these pollutants to local energy, fertilizer, high value bedding, while reducing pathogens and smell by over 95 percent (http://www.epa.gov/agstar/documents/gordondale_report_final.pdf).   In addition, the remaining digestate, which is the liquid left over from the digesters, can be stored and used in irrigation systems to add water and nutrients to crops at optimal times.

8. Biomass energy reduces greenhouse gas and other emissions, and can be grown sustainably

Biomass is “young” stored solar energy. Through photosynthesis, water is combined with carbon dioxide to form hydro-carbon compounds.  Depending on the biomass, the stored carbon is one to 100 years old.  In a natural system of growth and decay, all of the biomass would eventually go back to the atmosphere as carbon dioxide or methane as the biomass oxidizes (rots), if not used.   Converting the biomass for productive energy reduces the total carbon emissions because it replaces old (fossil) carbon that has been stored in fossil fuels for millions of years.  In addition, half of a tree’s mass is in the roots and some of the carbon is taken up by surrounding soils and stored there.

The vast majority of modern biomass combustion units are labeled, highly efficient, and are regulated for air emissions.  This includes residential wood stoves.  Most biomass energy processes only use wastes from non-energy forest or crop applications.  Smaller branches, twigs, and leaves are not taken for energy use and contain most of the nutrients, which are recycled into the soils on the forest floor.   Residual ash from the combustion process, which contains valuable nutrients, can be reapplied to the land.

In 2012 and 2013 solar and wind supplied 51% and 37%, respectively, of all new electric generation capacity in the US (wind power additions fell in 2013 as a result of the expiration of the production tax credit). 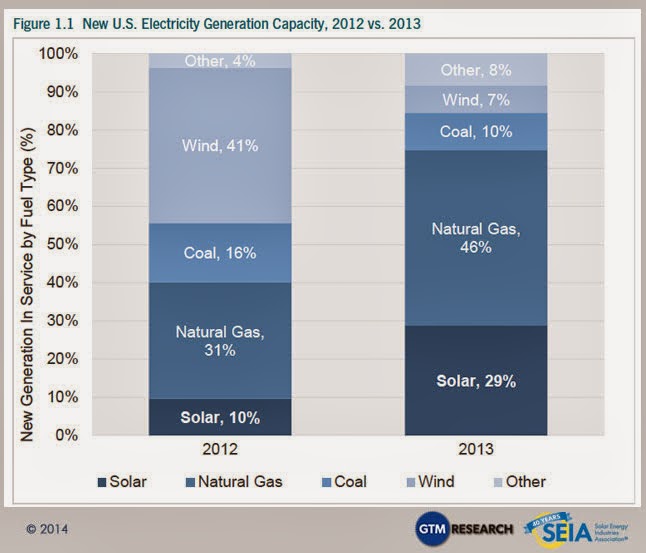 Renewable energy now produces more power than nuclear energy in the US.
Solar energy grew at a 40% rate in 2013 from 2012.  Wind energy has over 60,000 Megawatts of installed capacity, a ten-fold increase from 10 years ago.

Surveys consistently show that Wisconsin citizens prefer renewable energy over fossil fuels.  Over 83% of Wisconsin voters support solar, wind, and hydro as their energy source vs about 50 percent for coal and nuclear (Source: Voter attitudes towards Energy Issues in Wisconsin, 2012).