Will we create a grid smart enough for the 21st century? 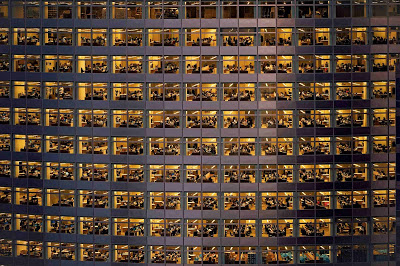 As daylight fades, Manhattan continues to gorge on power. New York City is tied to fuels like natural gas, with less than one percent of its electricity coming from wind or solar.

From an article by Joel Achenbach in National Geographic, with photos by Joe McNally

Can we fix the infrastructure that powers our lives?

We are creatures of the grid. We are embedded in it and empowered by it. The sun used to govern our lives, but now, thanks to the grid, darkness falls at our con­venience. During the Depression, when power lines first electrified rural America, a farmer in Tennessee rose in church one Sunday and said—power companies love this story—”The greatest thing on earth is to have the love of God in your heart, and the next greatest thing is to have electricity in your house.” He was talking about a few lightbulbs and maybe a radio. He had no idea.

Juice from the grid now penetrates every corner of our lives, and we pay no more attention to it than to the oxygen in the air. Until something goes wrong, that is, and we’re suddenly in the dark, fumbling for flashlights and candles, worrying about the frozen food in what used to be called (in pre-grid days) the icebox. Or until the batteries run dry in our laptops or smart phones, and we find ourselves scouring the dusty corners of airports for an outlet, desperate for the magical power of electrons.

The grid is wondrous. And yet—in part because we’ve paid so little attention to it, engineers tell us—it’s not the grid we need for the 21st century. It’s too old. It’s reliable but not reliable enough, especially in the United States, especially for our mushrooming population of finicky digital devices. Blackouts, brownouts, and other power outs cost Americans an estimated $80 billion a year. And at the same time that it needs to become more reliable, the grid needs dramatic upgrading to handle a different kind of power, a greener kind. That means, among other things, more transmission lines to carry wind power and solar power from remote places to big cities.

Most important, the grid must get smarter. . . .