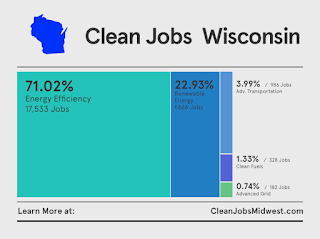 Last week, two reports came out that demonstrate the incredible value of Wisconsin’s Focus on Energy program to our state’s citizens and economy.

Focus on Energy is the program that people and businesses across the state use for rebates, advice, and technical support to save money by using less energy.

The first was a report issued by a group called the Clean Energy Trust.  It showed the number of people across 12 Midwest states who work in the delivery of energy saving products and services and renewable energy technologies.

In Wisconsin, we have nearly 25,000 people working in these industries according to the report.  Companies like Miron Construction in Neenah, Broadwind Towers in Manitowoc, Cree Lighting in Racine, Trane in La Crosse, and countless small businesses throughout the state are delivering energy solutions for businesses and residents.

However, of the twelve Midwestern states surveyed, Wisconsin ranked last in the number of persons working in these industries on a per capita basis.  The report clearly shows that Wisconsin has a tremendous opportunity to tap these sectors for further employment growth.

The second report was a draft “Strategic Energy Assessment” from the state of Wisconsin’s Public Service Commission.  This report showed that Wisconsin has the highest electricity rates of eight Midwestern states.

However, because our citizens use energy more efficiently, our monthly energy bills aren’t the highest. In fact, our monthly bills are among the lowest in the region.

The Public Service Commission identified the energy-smart nature of our citizens and specifically pointed to the Focus on Energy program for enabling citizens to save money on their monthly bills.

It’s against the backdrop of these reports that our Legislature has recently passed a bill, AB 804, that cuts $7 million each year out of Wisconsin’s highly successful Focus on Energy program.  The bill is sitting on the Governor’s desk, and it is my understanding that the Governor has the ability to line-item veto that provision in the bill.

Funding for Focus on Energy should be kept whole.

Focus on Energy delivers $3.33 in savings for every dollar invested. The program keeps energy bills lower for citizens and businesses, despite Wisconsin’s higher rates. Focus on Energy is supporting thousands of jobs, but Wisconsin is behind our neighboring states.  A cut to this program will only make that gap larger.

More jobs. Less waste.  Saving money.  Common sense goals for a stronger Wisconsin, and Focus on Energy is delivering.  Let’s keep this program strong now, and for years to come.